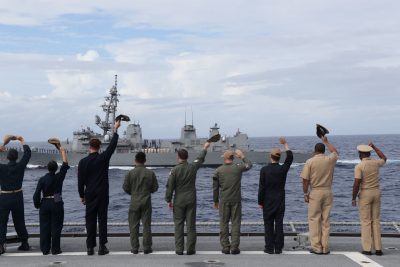 Australian Defence Minister Richard Marles said in a July 2022 speech that Australia needed to ‘attune itself to the concerns of the Indo-Pacific region’. That includes Southeast Asia.

An Australia that is unattuned to the concerns of its neighbours will be more likely to formulate foreign and defence policies that are inconsistent with promoting deeper relations with Southeast Asia — especially if strategic interests divergence.

Former Singaporean diplomat, Kishore Mahbubani, points out the danger of Australia and ASEAN drifting apart on strategic issues, which could lead to Australia’s isolation from Southeast Asia. But Australia and ASEAN member states have already diverged on the rise of China.

Australia’s relations with China have deteriorated since the mid-2010s because China was perceived as a threat to Australia’s external and domestic interests. Several Australian defence documents, such as the 2017 Foreign Policy White Paper, argued that China was challenging Washington’s dominance in the Indo-Pacific region. That led Australia to revitalise the Quadrilateral Security Dialogue in 2017 and form AUKUS with the United Kingdom and the United States in 2021.

While Australia sees China as a security threat, information obtained through interviews with ASEAN member states’ defence officials, policymakers and academics demonstrates the region has more complex security concerns. Respondents from Brunei, Indonesia, Malaysia, the Philippines, Singapore and Vietnam have a unanimous conviction that China is a revisionist maritime power that may undermine the international maritime order to support its claims in the South China Sea.

But the respondents agreed that China’s rise was not only perceived in a negative light — regional states have benefited from Beijing’s economic rise. They recognise that relations with China need to be managed delicately by preventing a problem in one area, like maritime borders, from affecting another, like foreign investment. A Vietnamese respondent thought that disputes with China over the South China Sea should not overshadow its other economic and security relations with Beijing.

Respondents from ASEAN member states with territorial claims over the South China Sea consistently point out threats to regional stability from sources other than China. For some, Washington’s Freedom of Navigation Operations are destabilising and could provoke China into a military conflict in the South China Sea. While Washington could pull its military forces from Southeast Asia in the aftermath of such a conflict, regional states would still have to live with China.

Besides the South China Sea dispute and the US–China rivalry, respondents shared other urgent security concerns faced by regional states. The Philippines and Thailand are concerned by domestic insurgencies driven by minority-Muslim grievances, while Indonesia is fighting a separatist movement in West Papua. For some, the legacy of the Cold War is still a security threat. Cambodia and Laos have plenty of unexploded ordinances from the Vietnam War in their territories.

The South China Sea and China are not the only maritime security concerns. Respondents from Malaysia, Indonesia and the Philippines point out threats from arms smugglers, human traffickers and terrorist groups in the Sulu Sea. Singapore and Thailand, among other states, are concerned about the dangers of piracy to their Sea Lines of Communications. In the case of Thailand, piracy threatens the security of oil tankers sailing from Singapore.

Non-traditional threats are another area of concern for regional states. For some, illegal fishing is a security and economic challenge. Evidence seized from vessels involved in illegal fishing suggests that another major Asian power, besides China, is a culprit. Vietnam is concerned about food and water security in the Mekong delta. Many mainland regional states emphasise transnational security issues, such as cybercrime or a lack of state cyber security capabilities.

There was a consensus among the respondents that Australia is the region’s most trusted security partner, ahead of the United States and China. But that trust will erode if Australia is perceived to advance an agenda contrary to the strategic interests of ASEAN members.

Understanding the region’s security concerns will enable Australia to calibrate policies to boost its soft power through assistance to regional states consistent with Australian values. Australia should avoid employing the ‘China’ threat as an overarching framework to engage the region. It would likely isolate Australia from Southeast Asia as its leaders have consistently argued against taking sides in the US–China rivalry.

The use of suitable language to engage ASEAN is critical too. A senior defence official from an ASEAN country commented on the major powers’ respective approaches — ‘when China speaks to ASEAN, it involves investment and trade. It is a language of win–win for both parties. When the United States engages in ASEAN, the main language is conflict and war. Whom will you choose?’. If Australia is to successfully ‘attune itself’ to the region’s concerns, it will need to expand its vocabulary.

Abdul Rahman Yaacob is PhD candidate at the National Security College (NSC), The Australian National University. He was one of four Chief Investigators in a recently concluded project on Australia–ASEAN defence relations, hosted by NSC and funded by the Australian Army Research Centre (AARC). Some information for this article is drawn from a report submitted to AARC titled Finding Australia’s Role in Southeast Asian Security.