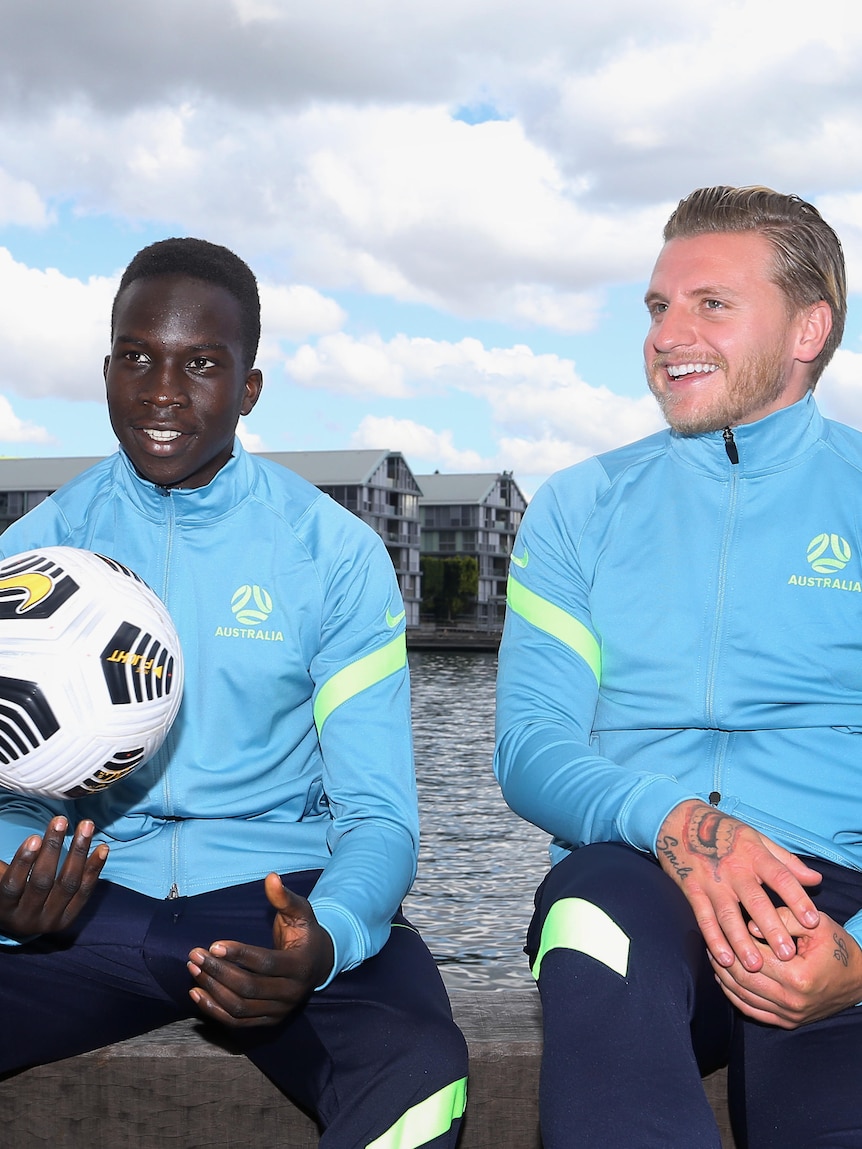 Central Coast Mariners sensation Garang Kuol has earned his maiden World Cup call-up at just 18 years of age, despite having not started a single professional game in his fledgling football career.

Kuol, alongside Mariners team-mate Jason Cummings, were two of several unexpected inclusions in Graham Arnold’s 26-player squad headed for Qatar after impressing both individually and as an attacking duo in the opening rounds of the A-League Men.

The pair headline a surprising mix of emerging talent and established stars, with 11 of the 26 chosen players having ten caps or fewer.

Scotland-based midfielders Keanu Baccus and Cameron Devlin are part of that new cohort, having made just one appearance each for the Socceroos.

They have, however, played regular minutes for their clubs recently and worked under Arnold with the Under-23s side at the Tokyo Olympics alongside fellow call-ups Thomas Deng, Nathaniel Atkinson, Joel King, Riley McGree, Kye Rowles, Harry Souttar, and over-age player Mitchell Duke.

“It’s been a tough few days,” Arnold said. “I’ve had to make a lot of phone calls and, at the end of the day, phone calls that disappoint people, which is very difficult.

“But I’d rather look at the positives. Look at this group of young players that we’re taking to the World Cup.

“I do feel that, if there is a legacy, that is the young kids coming through. When I took over in 2018, it was an ageing squad. I was thinking, ‘where am I going to take this? Where am I going to get these players? We’re losing players like Jedinak and Cahill and Milligan, how am I going to replace them?’

“That’s why I did the Olympic team. When you do that, you build that trust and belief in these kids.”

Overall, 17 players will be going to their first World Cup. While Arnold insisted that regular match-minutes at the highest level was a major factor in his selections, he also conceded he has taken some risks in choosing certain players, particularly centre-back pairing Rowles and Souttar who have only just returned to the pitch following lengthy injury spells.

Positional versatility and individual qualities that suit the systems Arnold is wanting to deploy against France, Tunisia, and Denmark also played a role in some of his decisions.

The addition of these fresh faces to the squad has meant there is no room for more experienced players including Cerezo Osaka striker Adam Taggart, who took part in the 2014 World Cup in Brazil, nor for veteran centre-back and Arnold’s son-in-law Trent Sainsbury.

Tom Rogic has also been left out of the squad after missing the Socceroos’ final qualification phase, including the play-off games against the UAE and Peru, and who hasn’t received many minutes at club level since moving to West Brom in England’s Championship.

While the Kuol-Cummings double-act has landed well amongst fans and promises to provide some much-needed spark to the Socceroos’ attack, some other decisions made by Arnold have been widely questioned.

The exclusion of goalkeeper Mitch Langerak from the side has surprised fans given Arnold himself reportedly coaxed the Japan-based gloveman out of retirement recently following consecutive impressive seasons with Nagoya Grampus in the J1 League.

“I’ve got to trust that process of John Crawley. I trusted John when we played Peru with that substitution that changed [everything].

“Mitch is a fantastic guy, a fantastic goalkeeper, and bringing him back was around what happens if something happened to one of the other goalkeepers?”

19-year-old rising Roma star Christian Volpato, who has dual Australian-Italian citizenship, was also approached by Arnold over the last few days with an offer to be part of the Qatar squad, but turned down the opportunity.