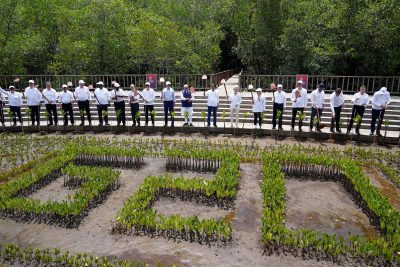 Is there anything that can’t be solved by getting away to Bali for a few days?

For months leading up to last week’s G20 Leaders’ Summit, it was hard to say whether expectations for Indonesia’s presidency were too high or too low. Certainly, it appeared plausible that the G20’s decision-making processes would seize up as members divided over Russia’s participation. In the immediate wake of the invasion of Ukraine, it wasn’t outlandish to expect that a leaders’ summit wouldn’t go ahead at all; in this view, the bar for success was merely having the key players show up, regardless of whether anything of substance was achieved.

At the same time, Indonesian President Joko Widodo made a big political bet of his own on the success of the summit — enough that some close to the process worried that the Indonesian public, to whom the government was eager to sell a success story ex ante, weren’t properly prepared for the real possibility that this G20 could be a failure.

In the end Jakarta’s gamble paid off: the G20 outperformed expectations, even if we must remain realistic about the challenges facing global multilateralism. Indeed, the Bali summit has against the odds consolidated the G20’s self-designation as ‘the premier forum for global economic cooperation’.

After early speculation that the G20 would fracture under geopolitical tensions and cease to exist in its current form at all, a residual question was whether the leaders could possibly reach consensus decisions given the current membership. Key ministerial-level meetings in the lead up to the summit failed on this point; the default scenario seemed that the Bali G20 would make history by being the first to fail to produce a communique.

The summits leading up to the G20, which likewise operate on a consensus basis, set a discouraging precedent: just days earlier the East Asia Summit in Cambodia failed to achieve a consensus declaration, likely thanks to the inherent tensions between its US, Chinese and Russian members on security issues.

Not only was there a negotiated text from Bali, it came in the form not of a chair’s statement or summary but as an official consensus declaration to which all members agreed. Its language about the Ukraine war bears the signs of a hard-argued compromise in the lead up to the summit, containing both severe censure of Russia with acknowledgement of ‘other views’. Russia’s attempts to use the G20 as a platform to show off its influence and legitimacy failed, and the G20 is better off for it.

Even those who deride bodies like the G20 as talkfests acknowledge the spin-off benefits of the sideline dialogues that these events facilitate. In Bali, Xi Jinping and Joe Biden sought to show a worried world that the United States and China can still talk. Both leaders sent the right messages about avoiding conflict and a Cold War; the region awaits policies that actually demonstrate such a commitment. Anthony Albanese became the first Australian prime minister to meet a Chinese head of state since 2016, vindicating his government’s more demure approach to China while wisely avoiding being drawn into a negotiation with Beijing over policy change in exchange for sanctions relief.

That marks two major economic meetings in 2022 that have exceeded expectations. In Geneva in June, the 12th WTO Ministerial Conference (MC12) surprised everybody by showing — by the mere act of agreeing on something of substance — that there’s still life in the beleaguered trade body. In Bali, G20 leaders put their support behind the reform agenda endorsed at MC12: committing to seize and advance the positive momentum to improve its functions, including dispute settlement body reform.

As M Chatib Basri writes in this week’s lead article, in making this year’s G20 a success ‘[it] helps that the key players, not least Indonesia, understood the economic stakes of failure. Asia, more than any other region, has the most to lose from the retreat from globalisation and the bifurcation of the global economy that might emerge from efforts to force “decoupling” between the United States and China’.

But it also testifies to the diplomatic skills of the Indonesian hosts, who have done an incredibly important and underappreciated role in keeping the G20 alive and kicking. Indonesia, as we observed earlier this year, has the combination of non-aligned credibility plus the economic and strategic heft that’s needed to act as a bridge between developed and developing worlds, the US and its allies, China and the non-aligned world.

Given this, as Basri observes, Indonesia’s studious avoidance of big power alignment is a feature, not a bug. In ‘not choosing sides and not being pulled into one camp or another’, Indonesia’s quiet brand of leadership ‘is welcomed by most of Asia and the developing world as it struggles to find balance between increasingly divided political blocs.’

Bali is hopefully a harbinger of a productive year for Indonesia as Chair of ASEAN in 2023. ‘Despite the distraction of national elections in early 2024, Indonesia chairing ASEAN in 2023 presents an opportunity to step up regionally on the global threat to its core national economic and security goals’. The Regional Comprehensive Economic Partnership (RCEP)’s potential as an instrument of region-wide economic cooperation and rulemaking is underdone, albeit at an early post-pandemic stage; a key goal for Indonesia’s ASEAN chairmanship is therefore to get region-wide buy-in for building on RCEP’s skeletal institutional base.

It’s a cliché of the American press that Indonesia is the most important country that we’ve never heard about. In its G20 year, though, Indonesia has made its potential seen and heard, and Jakarta, Basri writes, ‘takes the driver’s seat in ASEAN as the region faces the danger of becoming a pawn in the game of global politics. There has perhaps never been a time when its leadership in crafting a strategy to strengthen comprehensive regional security was more needed’.