The PLA is becoming an army fit for today 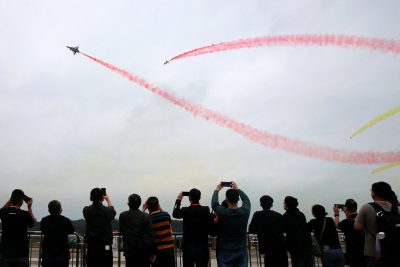 In his third term, Chinese President Xi Jinping’s priority is to accelerate China’s active defence military strategy transition from combat readiness to combat effectiveness to fulfil the centenary goals of the People’s Liberation Army (PLA) by 2027. China’s key goal is to increase its national security measures for modern warfare in order to consolidate its influence in global security governance.

The 20th Party Congress Report indicates that China is attempting to play a more assertive role as a global security actor by building a professionalised army fit for modernised warfare. There is no doubt that ‘security’ is the key concern in Xi’s report at the 20th Party Congress, with the term mentioned 80 times. ‘Security’ has also expanded beyond traditional concerns to include areas such as ideology, culture and outer space. The report also emphasised Beijing’s aims to improve the mechanisms for China’s participation in global security governance, safeguarding China’s new pattern of development.

On 8 November 2022, President Xi inspected the Joint Command Centre of the Military Commission, where he stressed the importance of China’s new Central Military Commission (CMC) in strengthening the PLA’s military preparedness. CMC Vice Chairman Xu Qiliang stated the three objectives of the Chinese Communist Party to modernise China’s national defence and armed forces. These are to ‘achieve the centenary objectives of the PLA by 2027’, ‘to complete the modernisation of national defence and the armed forces by 2035’ and to ‘fully transform the armed forces into world-class forces by the mid-21st century’.

Beijing is committed to consolidating its role as a security leader by setting norms and standards for ‘grey-zone’ military operations — military operations other than war. But Beijing’s top military priority in the coming years is to accelerate the modernisation of its military and securitise its economy against external threats. The Global Security Initiative put forward by Xi in April 2022 showcases China’s attempt to set global security rules and promote international security cooperation. But to grasp a more affirmative role in global security governance, China needs a modernised and professionalised army that is fit for combat in informatised warfare.

Xi has placed national security and military matters at the top of Beijing’s policy agenda since coming to power in 2012. Under his anti-corruption campaign, the PLA has been decommercialised, professionalised and modernised. The PLA’s military doctrine has shifted from emphasising battle readiness to fighting and winning informatised local wars. But this change of slogan does not necessarily equate to an attempt by China to rewrite the global security rules through outright violence.

When US House of Representatives Speaker Nancy Pelosi visited Taiwan, many Chinese netizens were disappointed at the lack of action from the PLA in preventing Pelosi’s plane from landing in Taipei. Domestic audiences on Chinese social media platforms expected a more aggressive military response.

Although the Chinese Ministry of Foreign Affairs’ response was much like its previous responses on the Taiwan issue, the military’s rhetoric was much more muscular. For decades, China has protested with harsh language, warning Washington not to ‘play with fire’ while staging military exercises to show its displeasure. But China has not fought a conventional war since invading Vietnam in 1979. Its posturing over the past few decades has been passive–assertive, cautiously avoiding the possibilities of escalating the Taiwan or South China Sea situations, or border clashes with India, into conventional warfare.

In the 20th Party Congress report, Beijing once again warned of the potential use of force against Taiwan. Beijing’s message is a clear notice to Washington to back off from intervening in China’s internal affairs. This does not signal a fundamental change in Beijing’s stance towards the Taiwan issue, but rather a more assertive tone which stresses the role of the PLA in Beijing–Taipei–Washington relations.

Russia’s invasion of Ukraine is also alarming for Beijing, as it is now clear that winning over Taiwan through military means requires sophisticated operational planning and training. Voices within the PLA Navy have expressed concern over engaging in cross-Strait military operations, especially with the possibility of US naval engagement. With the US Navy re-emphasising its strategic priority to forward deployment in the Indo-Pacific, imbalances and instabilities in the Taiwan Strait could significantly impact existing geopolitical tensions within the region. The PLA has a long way to go to ensure its chances of seizing Taiwan.

Despite Beijing’s continuous efforts to increase the pace of military modernisation, Xi’s 20th Party Congress report also indicated that the PLA confronts a series of risks and challenges. The newly elected CMC will continue to face immense political pressure from the Central Party leadership to deliver progress in military modernisation and professionalisation through intensified training under combat conditions and an emphasis on joint, force-on-force and high-tech training. Ensuring the political and ideological loyalty of the army to the Party will also be of the utmost importance to Chinese policymakers.

As Beijing’s external security environment deteriorates, China’s military priority has shifted from combat readiness — ‘preparing to tackle external security threats’, to combat effectiveness — to ‘fight and win the future military showdown’. Only with a sophisticated army, equipped with modern warfare combat capabilities, and a resilient and sustainable economy can China defend itself and safeguard its core national interests against external geopolitical instabilities.