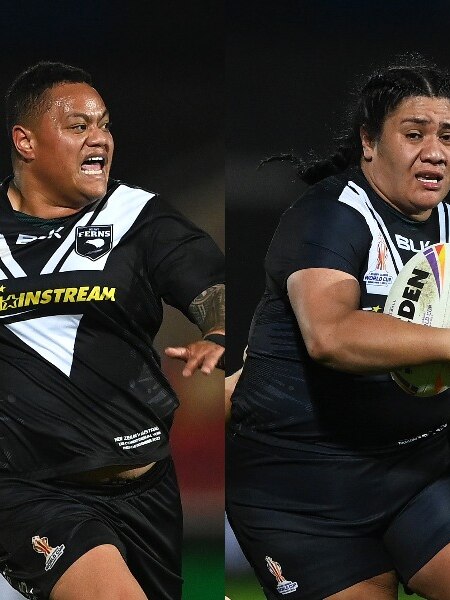 New Zealand might be outsiders in the women’s rugby league World Cup final against Australia but they boast a childhood combination that’s good enough to bust up any team in the world — and that includes the Jillaroos.

Second-rower Amber Hall and centre Mele Hufanga have been two of the Kiwi Ferns’ best in this World Cup, earning player of the match awards in their last two matches and landing a spot in the team of the tournament.

Individually, both players are stars but, together, they’re unstoppable wrecking balls and it’s been that way ever since they first played together in their teens.

“Me and Mele have known each other for ages. We’ve been playing together since we were at school when we were 14, so it’s nothing new for me and Mele, but she’s finally come over to the right side and started playing rugby league,” Hall said.

“It’s nice having someone like that on my outside but, for me, it’s just normal.

“Mele went to Southern Cross, I was at Auckland Girls Grammar and we met in a rep team. Mele’s from the south side and I’m from central, and it brought us together.

“She’s playing club footy back home and I’ve been trying to get her over to Brisbane for ages. Hopefully, she joins me next year, wherever I am.”

Hall was a known commodity coming into this tournament — she’s been one of the best forwards in NRLW since the competition’s inception — but Hufanga has been the World Cup’s breakout star.

One of the few players in the Kiwi Ferns side without NRLW experience, Hufanga slid under the radar a little but she’s well known in New Zealand as a gun centre for Auckland in Super Rugby Aupiki.

After excellent performances against Australia in the group stages and England in the semi-finals, NRLW sides will no doubt be queuing up to land Hufanga for next year’s expanded season.

According to halfback Raecene McGregor — who claimed the Golden Boot as international player of the year — that success was due, in no small part, to her combination with Hufanga and Hall.

“This was my first time meeting Mele, for her to have come over from rugby and not have played much league before, she’s a real asset to our game and we have to hold on to her,” McGregor said.

“They make me look good. I’m really lucky. Mele has stepped up in this tournament and Amber is always strong for us.

“Giving her early ball and seeing what she can do, that’s the key.”

McGregor, Hall and Hufanga shape as the key players for New Zealand if they’re to spring the upset on Australia at Old Trafford on Sunday morning (AEST).

They can take some inspiration from the Black Ferns’ epic win over England in the Rugby World Cup final last week, which the squad gathered together to watch at their base in York.

“We woke up early to watch and it was crazy. We’re so proud of the Black Ferns,” Hall said.

“Theresa Fitzpatrick played league with me when we were young. We used to play with the boys from the time we were seven years old and she was the only other girl.

“She went to rugby when she was 10 and I had to hold it down for the girls for a couple of years until I wasn’t allowed to play with the boys.

“I’m trying to get Theresa to come over to the right side and come play league as well.”