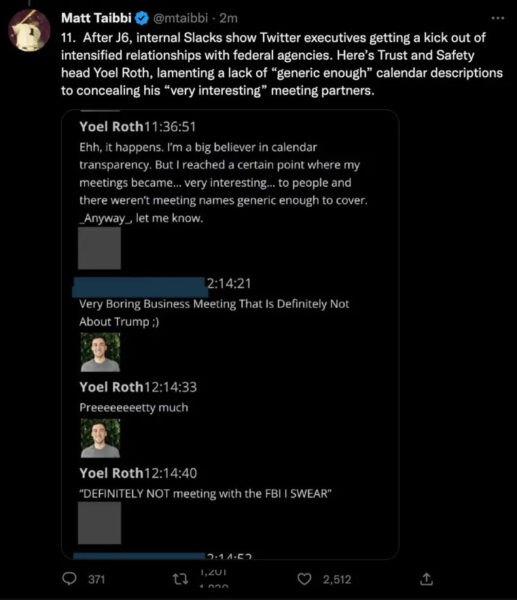 The latest batch of Twitter files released by Elon Musk through independent journalist Matt Taibbi revealed the company’s process behind deplatforming then-President Donald Trump in the wake of the January 6 Capitol protests. Twitter employees violated their own policies in banning Trump’s account, while top content moderation officials seemed ecstatic about their regular meetings with federal law enforcement agencies, including the FBI.

In one message, Yoel Roth, then Twitter’s head of trust and safety, discussed his attempts to frame his frequent meetings with the FBI and other government agencies that assisted with Twitter’s content moderation. “I’m a big believer in calendar transparency. But I reached a certain point where my meetings became…very interesting…to people and there weren’t meeting names generic enough to cover,” Roth wrote in a company Slack channel.

One employee, whose identity was obscured, replied with, “Very Boring Business Meeting That Is Definitely Not About Trump :).”

One message said, “we currently analyze tweets and consider them at a tweet-by-tweet basis which does not appropriately take into account the context surrounding.”

“You can use the yelling fire into a crowded theater example — context matters and the narrative that trump and his friends have pursued over the course of this election and frankly last 4+ years must be taken into account,” the message continued.

Taibbi wrote, “Before J6, Twitter was a unique mix of automated, rules-based enforcement, and more subjective moderation by senior executives.”

“As the election approached, senior executives — perhaps under pressure from federal agencies, with whom they met more as time progressed — increasingly struggled with rules, and began to speak of ‘vios’ [violations] as pretexts to do what they’d likely have done anyway,” he added.

Prior to banning Trump, Twitter officials began the process in December by adding “warning” labels to a bumber of his tweets. On December 10, one message showed that “Twitter executives announced a new ‘L3 deamplification’ tool” that limited users from sharing Trump’s tweets.

“Some executives wanted to use the new deamplification tool to silently limit Trump’s reach more right away,” Taibbi wrote.

According to Taibbi, the first tweet under consideration included a link to a Newsmax interview in which U.S. Rep. Jim Jordan (R-OH) stated that Trump received “11 million more votes” than official tallies showed. “However, in the end, the team had to use older, less aggressive labeling tools at least for that day, until the ‘L3 entities’ went live the following morning,” Taibbi wrote.

“The significance is that it shows that Twitter, in 2020 at least, was deploying a vast range of visible and invisible tools to rein in Trump’s engagement, long before J6. The ban will come after other avenues are exhausted.”

The latest Twitter files were released just a day after longtime journalist Bari Weiss released a thread detailing the company’s shadow-banning practices. Weiss revealed that Twitter employees would routinely use a number of deamplification tools on right-wing journalists and pundits, which was done without anyone knowing outside Twitter employees.