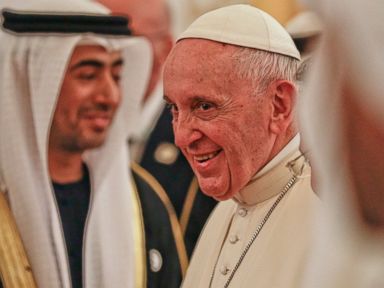 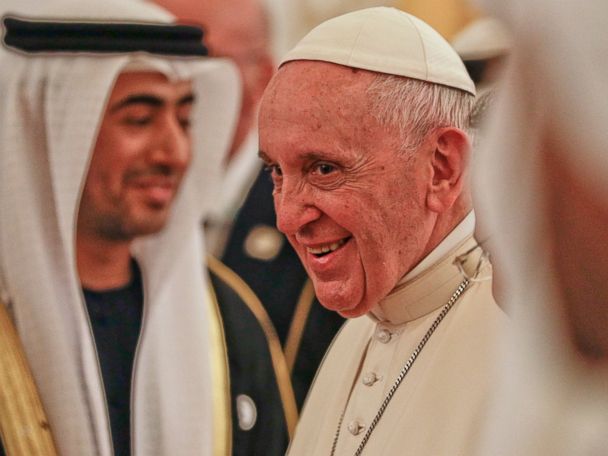 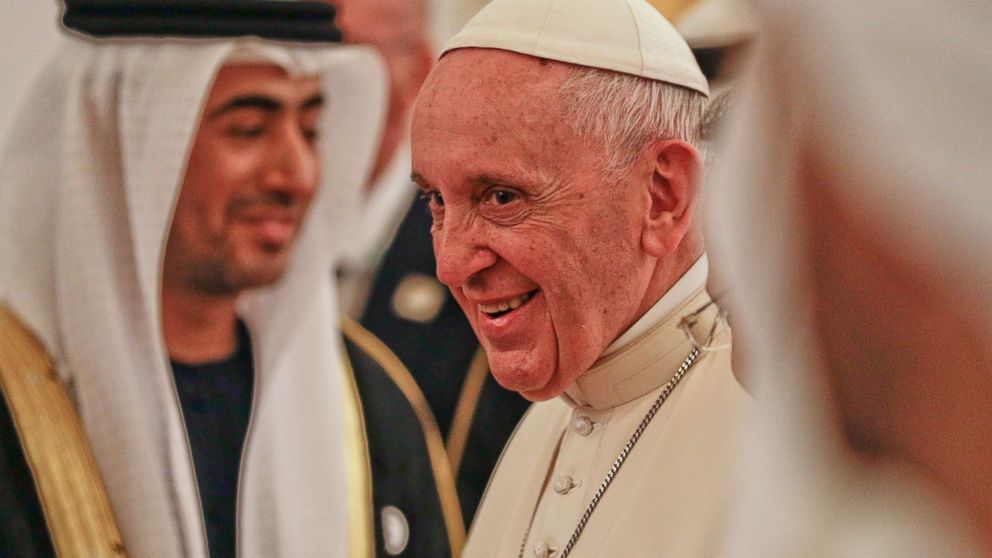 Pope Francis received a grandiose, pomp-filled welcome on Monday as he opened his historic visit to the Arabian Peninsula by meeting with Emirati rulers ahead of an address to faith leaders gathered in a Muslim region known for its restrictions on religious freedom.

Francis arrived at the Abu Dhabi presidential palace in a tiny Kia hatchback, but was greeted with an artillery salute and military flyover by a country now at war.

Even for a nation known for its excesses, the Emiratis’ red-carpet welcome was remarkable for a pope who prides himself on simplicity. It featured horse-mounted guards escorting the pontiff’s motorcade through the palace gardens while the flyover trailed the yellow and white smoke of the Holy See flag.

In a message to the prince, written in the palace book of honor, Francis thanked him for his hospitality and assured the people of the UAE of his prayers and “the divine blessings of peace and fraternal solidarity.” Francis gave the crown prince a medal depicting his peace-loving namesake, St. Francis of Assisi, meeting the Egyptian sultan Malek el-Kamel 800 years ago.

Sheikh Mohammed, for his part, gave Francis a framed notarized decree from June 22, 1963, in which the then-ruler of Abu Dhabi donated the land for the construction of the first Catholic church in the Emirates.

Francis’ speech to the gathering of faith leaders on Monday evening is to be the highlight of his brief, 40-hour visit to Abu Dhabi, the first to the Arabian Peninsula by a pope. His trip culminates on Tuesday with a huge papal Mass at the city’s sports stadium expected to draw some 135,000 faithful in a never-before-seen display of public Christian worship here.

As Francis began his trip, human rights groups who are banned from the UAE urged him to use his visit to press for accountability by the Emirati leadership for atrocities in the war in Yemen and its repression of dissent at home.

“Despite its assertions about tolerance, the UAE government has demonstrated no real interest in improving its human rights record,” Human Rights Watch said in a letter to Francis.

It was a reference to the UAE’s often-stated claims of religious tolerance — it has a minister for tolerance, is hosting the interfaith meeting Francis is attending and has declared 2019 its “Year of Tolerance.” That respect for non-Muslim forms of worship, however, runs up against the political reality of media censorship, repression of political dissent and limits placed on religious freedom.

Francis had actually made an urgent appeal for an end to the humanitarian crisis in Yemen just before he left the Vatican, calling Sunday for observation of a limited cease-fire so that food and medicine can get to its people, who are suffering the world’s worst humanitarian crisis.

The UAE has been Saudi Arabia’s main ally in the war in Yemen, where a Saudi-led coalition is fighting the country’s Houthi rebels. Francis’ pre-trip appeal was a way for him to avoid embarrassing his hosts with a public denunciation of the humanitarian costs of the war while in the region.

In another sign that regional politics was playing a not-insignificant role in Francis’ visit, the papal plane flew north of Qatar and around the peninsular, energy-rich nation on his flight Sunday.

Four Arab nations — Bahrain, Egypt, Saudi Arabia and the United Arab Emirates — have been boycotting Qatar since June 2017 as part of a regional political dispute. Tensions are still high between the nations, especially after Qatar’s win at the Emirates-hosted Asian Cup soccer tournament this past week.

By avoiding Qatari airspace, Francis omitted sending a telegram of greetings to the country’s ruler, Sheikh Tamim bin Hamad Al Thani, as he would do when flying through the airspace of countries. He sent one when passing by the island nation of Bahrain.

Sheikh Tamim traveled Monday to Kuwait, which has been mediating the crisis.

Thomas Cook repatriation ramps up as dispute erupts over pay

Sale ending soon? How online stores trick you into buying

Sale ending soon! Only two left! This is a hot item! If you’ve shopped online, you’ve probably seen messages like those before

Police: 3 Arizona children were suffocated by their mother

Authorities in Panama on Monday began exhuming a mass grave containing the remains of unknown civilians killed during the 1989 US invasion of the Central American country. The move follows a decades-long effort by families of missing people to identify remains buried in a common grave in the capital’s Jardin de Paz cemetery.

Bolivia’s Congress voted on Tuesday to accept the resignation of former president Evo Morales, two months after the 60-year-old quit and fled for asylum in Mexico and then Argentina.

The 29-year-old is due in court while another man remains in custody over the deaths in Ilford.

Knives ‘hidden in London parks to sidestep stop and search’

Knives are found in parks on a daily basis, says the boss of the Met’s Violent Crime Taskforce.

A man is held in Denmark after Swedish national Flamur Beqiri died in front of his family in London.

Demonstrators return to the streets saying Lebanon’s new government does not meet their demands.

The 75th anniversary of Auschwitz’s liberation threatens to be overshadowed by recriminations.

According to the Canadian Red Cross, the fire on Harold Street was reported shortly before 9 a.m.

Métis Nation-Saskatchewan (MN-S) in partnership with the Canadian Geographic has launched the Future of Michif Program, an initiative to revive the Michif language.

The Trump administration on Wednesday approved a right-of-way allowing the Keystone XL oil sands pipeline to be built across U.S. land,

SINGAPORE: Precautionary measures for all flights from China are in place, Singapore-based airlines told CNA on Wednesday (Jan 22), as the world struggles to contain a deadly coronavirus following an outbreak in China. The virus which has been traced to a seafood market in the central city of …

Commentary: The success of movie Parasite shows the Korean wave is about to get bigger

Not shying away from controversial topics, Korean films have attracted the attention of a wider public, says Agata Lulkowska.

The International Court of Justice on Thursday will rule on a request for emergency measures by Gambia, which has filed a case against Myanmar accusing it of genocide against the Muslim minority Rohingya population.

Poland’s president has snubbed an Israeli event to mark the 75th anniversary of the liberation of Auschwitz.

Smuggling arrests over transport of ‘10,000 Kurds’ to UK

The suspects allegedly took migrants from France to the UK in refrigerated lorries and rubber boats.