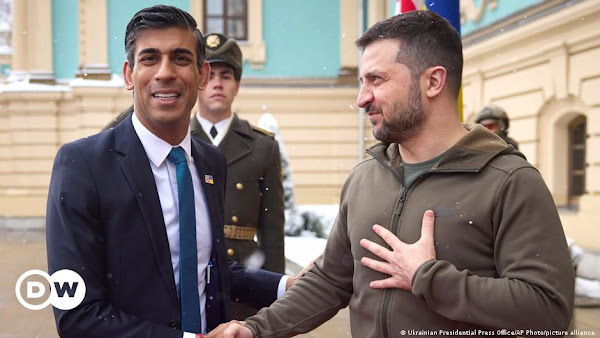 Daily Mail: Rishi Sunak ‘orders Goldman Sachs-style audit of how UK supplies are used in Ukraine war’ amid fears he will be overly-cautious during crucial phase of fight against Putin’s Russia

Rishi Sunak has reportedly asked for a ‘Goldman Sachs-style’ audit of progress in the war in Ukraine, sparking fears he is moving towards a more cautious approach to Vladimir Putin’s invasion.

Senior government figures are said be concerned the Prime Minister could change the UK’s stance on the conflict as it enters a crucial phase.

A source in Whitehall compared the move to a ‘Goldman Sachs dashboard’ review of the invasion and Britain’s supply lines to Ukraine.

WNU Editor: This is not a real audit. This is a normal British government mandated report and review on the actual military realities in the Russia – Ukraine war. I do not expect this report will ever be made public. I also expect zero change in policy when this report is finalized.

But what is interesting about this story is how the British media has responded to this leak. A leak (according to the BBC) from Whitehall. You would think that a thorough examination by the government on the progress of the war would be overwhelmingly supported by the media. Instead, it seems the British media are not only critical that this report is being done (parroting what the Whitehall leaker has said), but they are also deeply concerned that this report may result in a lessening of support for Ukraine.

When did Whitehall (i.e. the bureaucracy) decide what UK policy was to be? It looks like the UK has its own “deep state”.