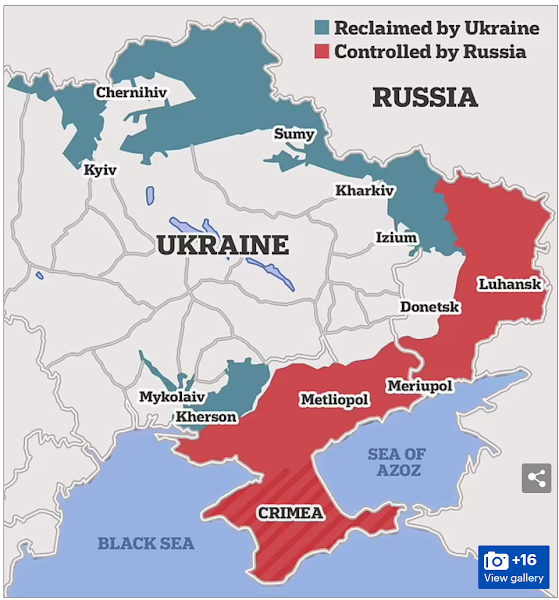 Daily Mail: Ukraine has now reclaimed more than HALF the territory Russia had captured since war began

* But Putin’s soldiers have been driven out of Kherson, as well as Kharkiv oblast

Ukraine has reclaimed more than 50 per cent of the territory it had lost since the beginning of the war to Russian troops, a new report has claimed.

Within a week of Vladimir Putin ordering his tanks to roll across the Ukrainian border on February 24, Russian armed convoys had paraded into north eastern Ukraine and had pulled up mere miles from the outskirts of Kyiv.

There they remained while Russian troops flooded into the south, rumbling through the Zaporizhzhia region and into Kherson where they seized the eponymous city on the Dnieper river.

The Chechen wars are a perfect illustration of Russian military doctrine in action. We in the West forget that at the beginning of the Chechen war Russia was driven out of Grozny and much of Chechnya. That they did not stop them. They regrouped, prepared their forces, and launch attacks focused on destroying the enemy. And once Chechen forces were destroyed, the rest of the country fell to the Russian invading forces.

This is why I am losing sleep with what I believe will soon be happening in Ukraine.

At the start of the war Russia committed about 20% of its forces to the conflict in the hope that it would force Kyiv to negotiate. That was a complete failure and disaster.

Today, I now see Russia committing approximately 70% of its forces to the Ukraine war, backed-up with an additional 320,000 reservists. In short …. I see 750,000 Russian military personnel being prepared to launch the biggest military campaign in Europe since the Second World War, of which almost 300,000 will be fresh ground combat troops.

On the Ukraine side I see the opposite. I see an exhausted military that has lost most of its original trained NATO army. Ukraine’s military is now made up of dedicated and committed reservists and volunteers. And while they have performed with honor and with great heroism, that is not enough to face what will soon be coming.

Even top US General Milley is seeing the obvious. As a military man he sees the need to freeze the conflict because the other option will in the end only spell mass casualties and destruction for Ukraine’s military, and for the country as a whole …. Ukranian Officials Furious Over Gen. Mark Milley’s Comments On The Need For Peace Talks (November 16, 2022).