One of the most terrifying events in recent days was that unknown persons threw a fragmentation grenade outside a neighborhood, which exploded. 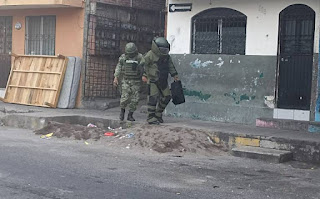 Crime in Colima is overflowing as a result of the criminal acts that have been registered in Colima, such as murders, the location of human remains and the throwing of a fragmentation grenade in a neighborhood located in the downtown area of the capital.

These events have increased in recent days, after the confrontation between two organized crime groups in the Social Rehabilitation Center of the capital of Colima.

Although no injuries were reported, it did cause damage to nearby homes.

It is worth noting that this site, located at the intersection of Manuel Gallardo Zamora street almost on the corner of 27 de Septiembre in the downtown area of the capital of Colima, has seen the murder and attempted murder of several people since the so-called war between two organized crime groups.

Elements of the “War Materials” group of the Secretariat of National Defense (Sedena) went to the site to remove the device.

Later, the body of a person was found inside a bag on Leona Vicario street in the center of the capital.

The body was found in the neighborhood known as “El Salatón”, where there have also been criminal acts such as murders.

Another crime occurred in the municipality of Villa de Álvarez, where a man was shot to death and two others were injured.

The event occurred in the Arboledas del Carmen neighborhood and according to information, the deceased was shot in the skull and thorax, and two other people were wounded, while the alleged perpetrators fled in a vehicle.

On Monday night, a woman was shot to death in the Barrio Alto neighborhood in the municipality of Comala.

According to the first reports, unknown subjects shot at a woman who was walking on Reforma Street, seriously wounding her in the head, which caused her death on the spot.