Where are all the competitors? Women’s jiujitsu is struggling to fill spots on the mat 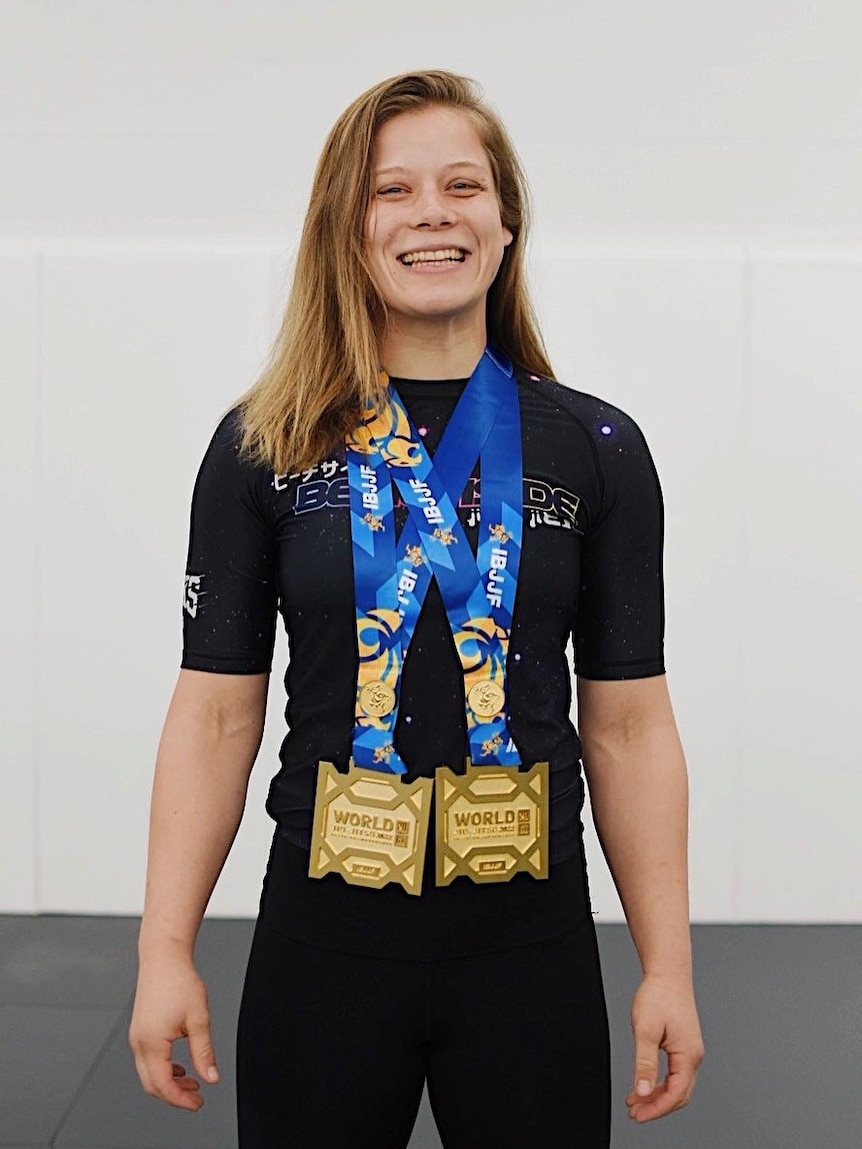 As last year’s highest-ranking female blue belt in Australia, Schultz has since become the 2022 purple belt world champion. On December 8 this year she won double gold at the No-Gi World Championships in Long Beach, California.

Earlier in the year however, Schultz couldn’t compete for a title in her home state because there were no other female contenders.

The 25-year-old took up the sport only three-and-a-half years ago but is considered a rising star within Australia. She has won state titles in Victoria and New South Wales and recently came away with three gold medals at the Pan Pacific Championships in October.

Brazilian jiujitsu has seen a rise in popularity over the past two decades since its initial introduction to Australia in 1993. The Australian Federation of Brazilian Jiu Jitsu (AFBJJ) holds a national championship once a year as well as a tournament in every state and territory.

But despite this increase in popularity, the number of women competing tapers out as the level of competition gets higher. There are five belt grades in jiujitsu, progressing from white to blue, purple, brown and finally to black. There are generally more white belts than blue belts and more blue belts than purple belts. Black belt tends to have the least number of competitors vying for a title.

“It kind of thins out the longer you have been training,” Schultz said.

“It gets harder the more experience you have. I feel like people are curious when they first start out but it becomes more intimidating with time. You feel like you have to prove yourself.”

But Schultz says that is not the only reason women who excel at the sport recreationally are not finding their way to state and national competitions.

“Obviously you have to pay and then there might just be one opponent, so I understand that not everyone is going to do that.”

The high cost of excelling

Three-time jiujitsu world champion, and Barkindji and Ngyampaa woman Shantelle Thompson, (OAM) understands more than most the challenges women face at the top of the sport.

In 2019, Thompson was the NAIDOC sportsperson of the year and in 2021 was awarded an Order of Australia Medal for services to the Indigenous community. Despite her accolades, Thompson still struggles to find adequate funding and resources to make a competitive career in jiujitsu feasible.

“I didn’t have the funds to pay a coach [after competing at my first world championship], to go, ‘hey, can we sit down and make a training plan.’ I’ve never had that strategic support,” she said.

“I’ve just sort of bounced from one competition to the next.”

While her previous world titles are testimony to her sheer dedication and a willingness to work with what she has, as a mother of five children and living in regional Victoria, Thompson does not have access to the resources that other elite-level athletes take for granted.

“You have to have the resources to actually get to those competitions, to even get ranked” Thompson said.

Despite this, Thompson’s commitment to the sport is unwavering and has only grown over time.

“I started at 19 because I was a very aggressive young woman. I had a lot of trauma triggers,” she said.

“I swung first and asked questions later. It was at that point that someone said, ‘hey you should go down and check out this martial arts club’.”

“Competing for me had a bigger purpose. I thought, I know how to street-fight, I know how to defend myself, but do I have what it takes to control and channel that energy, to turn it into something constructive rather than destructive?

“That was the start of the chapter of being a community role model, of becoming something bigger than myself.”

Thompson has been publicly documenting her journey to becoming a black belt over social media.

She is hoping to compete once again internationally under the Aboriginal flag.

“That’s why I’m building up my financial resources, so that I can actually buy back more of my time to be able to commit to training,” Thompson said.

Although Schultz’s jiujitsu career is just taking off, and Thompson has established over a decade of international experience, both women share the same barriers of trying to succeed in the sport.

A small pool of competitors

In addition to the costs of training and competing, within Australia there are still so few women competing at a high-level that most of them are already known to both Schultz and Thompson.

At the South Australian state titles this year, the two women actually met.

Schultz, who had no opponents to compete against, refereed at the event. Thompson was there accompanying her 15-year-old daughter, Nacinta, who competed that day as a juvenile blue belt.

The small number of female competitors means that by the time two opponents face each other in a match, there is every likelihood they have either met or competed against each other before.

This can make for an interesting tournament, as Schultz found out at the national championship in Melbourne last year, when she had to face the same opponent three times over two days.

“She got a tight guillotine on me in the first match,” Schultz said.

“And then in the second match I felt like I was fixing all the mistakes I had made before. But she also adjusted her game with a better attack. The third time was even more intense. We both levelled up every time we versed each other.”

Thompson, whose goal is to be a black belt world champion, has expressed interest in competing in men’s divisions to better prepare herself for the international circuit.

“It’s not to beat men or to prove a point. It’s to try and get as much competition experience as I can, to be as best prepared as I can be with the opportunities I have access to,” she said.

Despite the challenges, what drives Schultz is her love for the sport and a willingness to succeed in it, even or perhaps especially as a woman.

“At the moment I’m living my dream. I get to train every day. I just want to see how far I can take it. It’s not about winning the biggest thing; I just want to love what I do, and this is what I love.”

Nora Naomi Schultz will be competing for a Superfight title on January 14 in Austin, Texas.

ABC Sport is partnering with Siren Sport to elevate the coverage of Australian women in sport.

Zayda Dollie is a sports journalist, who believes in the power of athlete storytelling. After long-term stints in Timor-Leste and Indonesia, she is now based in South Australia. As an advocate for female voices in sport, hers can be read on The Roar.