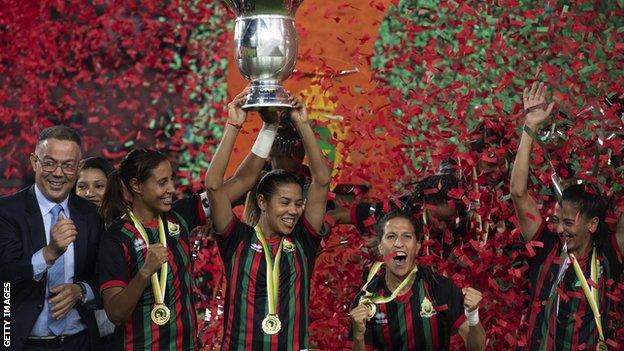 The coach of AS FAR praised his players after the Moroccan club beat nine-woman Mamelodi Sundowns 4-0 on Sunday to win the Women’s African Champions League title for the first time.

Ibtissam Jraidi was the hero in the final as she scored a hat-trick as AS FAR won the title on familiar soil, with the final taking place in their home stadium in the Moroccan capital Rabat.

“I cannot thank them the players enough – they always believed and were united,” said coach Mohamed Amin Alioua after the match.

Alioua also praised the fans and the Moroccan football federation, who had provided their national team facilities in Rabat in a bid to help the side.

Morocco star Fatima Tagnaout opened the scoring against the defending champions from the penalty spot in the 15th minute after Sundowns skipper Zanele Nhlapho brought down Zineb Redouani.

Sundowns were reduced to 10 after half an hour when Rhoda Mulaudzi was sent off for a challenge on Redouani, who impressed for Morocco at this year’s Women’s Africa Cup of Nations (Wafcon), following a video assistant referee (VAR) review.

The South Africans then had Nhlapho dismissed for a second bookable offence seven minutes into the second half, and AS FAR doubled their lead from the resulting free-kick as Tagnaout teed up striker Jraidi.

Jraidi raced through to fire past goalkeeper Andi Dlamini with three minute left to make it 3-0 and completed her treble in the first minute of stoppage time with a close-range finish after Dlamini fumbled a cross.

Morocco international Jraidi ended the second edition of the tournament with the golden boot, scoring five goals in total, while Atlas Lionesses team-mate Tagnaout, who had a hand in all four goals in the final, was named as best player.

“Congratulations to AS FAR, they deserved it as they played better than us,” Sundowns boss Jerry Tshabalala said.

“I can’t fault my girls as we gave everything we could. It wasn’t to be our day but we have learnt a lot from this game.”

AS FAR’s victory continues the success of sides from the north African country following investment in the women’s game by the Royal Moroccan Football Federation – with the national side finishing as runners-up to South Africa in July’s Wafcon.

Despite his side’s defeat, Tshabalala welcomed the strategy, with the ultimate goal to improve the standard of the game across the continent.

“You can see they are reaping the rewards,” he said.

“It’s a good thing to see what the Moroccan association has done for the ladies. They have invested a lot in women’s football.

“I’m hoping other African countries will follow suit so we can have bigger competition at club and international level.”

AS FAR forward Blessing Agbomadzi described her side’s win as “sweet revenge” after being part of the Hasaacas Ladies side beaten by Sundowns in the inaugural final last year in Egypt.

“I am so happy and excited as an individual,” she added. “I am so proud of myself right now.

“I am looking forward to defending the title next year.”