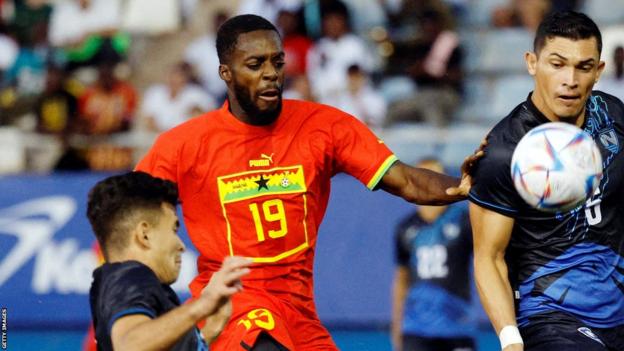 Not many black players have represented Athletic Bilbao nor have many Basques played for an African national team, but former Spain international Inaki Williams is bucking the trend as he stands on the verge of a World Cup debut with Ghana.

The forward won his sole senior cap for the country of his birth in 2016 but with none since, a trip to the West African country earlier this year prompted a family-inspired change of allegiance.

“I had to consult with my family and loved ones, because the decision would impact me during the next years of my career – not only in sporting terms but also on a personal level, because it is much more than football.”

He had turned a previous Black Stars approach down, believing it would not be right to oust “someone who really deserves to go and who feels Ghana 100%.”

Yet he changed his mind when visiting Ghana, after several years away, at the end of last season, with a family member cementing his decision.

“When he told me those words, I didn’t have to think any more.

“It’s a decision I’ve taken with my heart, regardless of what people may think or say – that maybe I am only playing for Ghana because they have qualified for the World Cup.”

The options open to Williams because of his heritage are underlined by younger brother and club team-mate Nico, 20, being named in Spain’s squad for the World Cup.

“I didn’t have that opportunity,” said Williams. “My opportunity came to me when I was 28.”

The two could potentially come up on opposing sides in the quarter-finals, drawing parallels with the 2010 World Cup when another Ghanaian, Kevin-Prince Boateng, faced off against half-brother Jerome, a Germany international.

Having grown up in Pamplona, 150 kilometres south-east of Bilbao, after his parents migrated from Ghana to Spain, Williams joined Athletic’s youth academy aged 18.

The club has a unique philosophy, only fielding players who were born in the Basque Country, came through its academy or that of other clubs in the region.

Williams became only the second black footballer to play for the club (after Jonas Ramalho) and the first to score for them, before Nico followed in his footsteps.

“With my brother’s arrival, people now see that being black you can also feel Basque, even if your parents come from outside,” he said.

“I feel both (Ghanaian and Spanish) equally. I grew up in Spain, but my parents are from Ghana and they have instilled the culture of Ghana in me,” he said.

“My brother too. We speak Twi at home, our parents have always talked to us in Twi. We have always eaten the food of Ghana, my whole family is in Ghana and the truth is it’s a 50-50 feeling.”

“Although I was not born in Ghana, my blood and family are from there.”

Despite only winning the first of his two caps in a 3-0 defeat by Brazil in September, Williams already feels like a leader in Otto Addo’s squad, who face Portugal, South Korea and Uruguay in Group H.

He certainly brings plenty of top-level experience, with 355 appearances and 80 goals for Athletic, to the four-time African champions.

“I’m almost one of the most veteran players,” he added. “I’ve been playing in the first division for almost nine seasons now. I can bring the seniority I have to make a difference.”

Although Ghana boast a cap centurion in forward Andre Ayew and further international nous in younger brother Jordan, Arsenal star Thomas Partey and centre-back Daniel Amartey, Williams hopes to impart his knowledge to some in the squad, half of whom have five caps or fewer.

“I think I can contribute a lot and help all my team-mates to not only have a good World Cup, but also with all that is to come their way,” he said.

“I will try to help and give them advice, like I do with my younger brother.”

And it was the brothers’ trip to Ghana that sparked something inside both, especially after their parents had risked their lives when crossing from west to north Africa nearly 30 years ago prior to successfully claiming asylum in Spain.

“You always ask yourself ‘What if I hadn’t been a footballer?’ If my parents had not arrived in Europe, where would I be?

“On the trip to Ghana, there were some very young kids lifting bricks, and I told my brother ‘Look, if it wasn’t for mom and dad, we might be one of these kids’ – very young people working from sun up to sun down.

“That’s also why I’ve come to Ghana. I can’t change the world, but I can make those kids, when they see me on TV, smile and be happy, and what I can do is leave myself on the pitch for these reasons so I can feel closer to the country.”