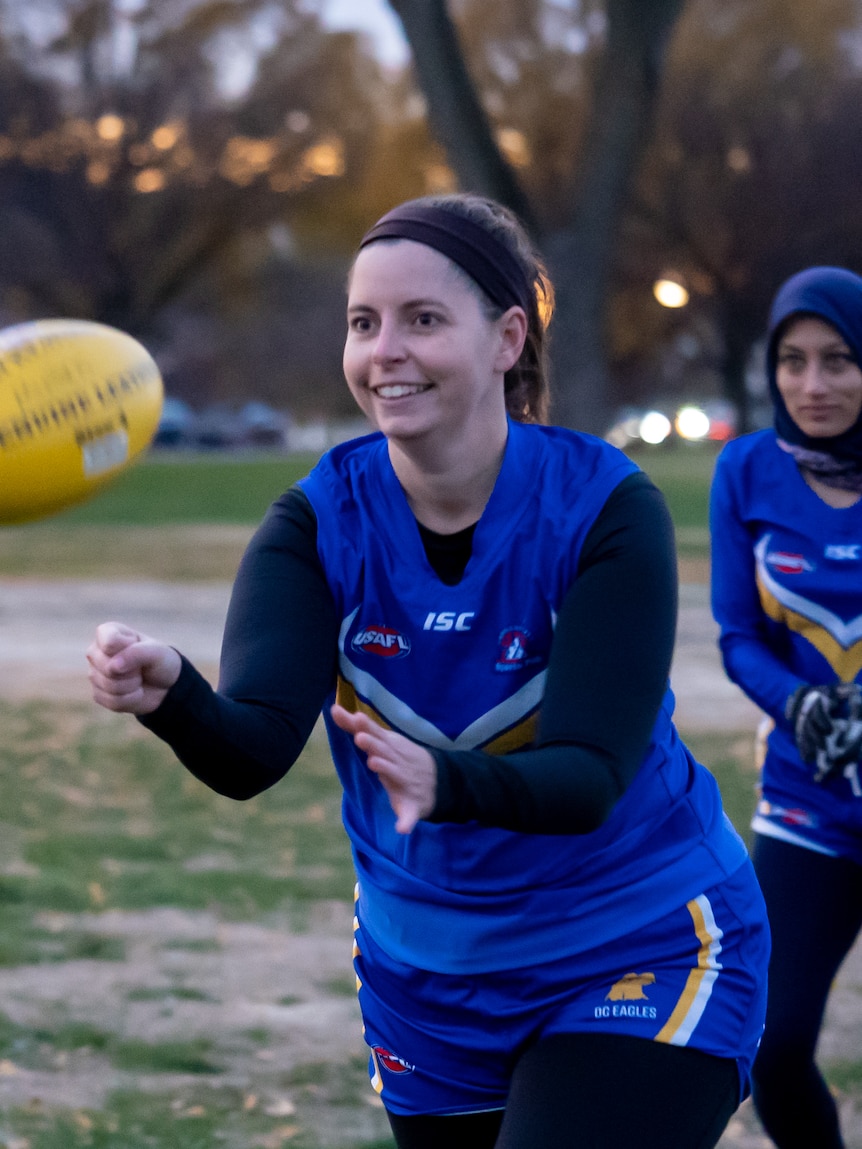 While the AFLW has just wrapped its first season with all 18 clubs, a branch of the game in the United States is breeding hundreds of young female players.

The USAFL community league has been around for more than 25 years, and 17 clubs now have a developing women’s side.

But player agents fear the AFL has “missed the boat” by not investing in international pathways when the women’s game was in its infancy.

Now sportswomen willing to move to Australia from the US are likely too far behind in their development compared with those already contracted to the AFLW.

“I think the AFL missed the boat,” Hill said.

“The talent we see now on the park week in, week out in the AFLW is at such a high level that to see someone come from what is their community league — anywhere in the world now — would be a massive step up.”

Since the AFLW competition was established in 2017, just one American woman has been able to break through – Essendon’s Danielle Marshall.

The Bombers forward credits her success to pursuing the game professionally in its early stages and also having contacts at her first club, the Western Bulldogs.

Marshall had a strong sporting background, having played soccer and ultimate frisbee at a high level.

But she admitted her exposure to AFL was fairly limited before moving to Melbourne to play at a state level.

“In Arizona, we only had like four girls, so a lot of times we were just playing around with the guys,” Marshall said.

When the AFLW started, Hill brought players from the US and Canada to Melbourne for development camps.

But as the league expanded, Australian clubs began leaning more towards signing Irish imports, who had experience playing Gaelic football and had a transferable skill set.

“They (clubs) head to Ireland where they know they’ve got an elite-level athlete — if nothing else — that plays a similar game to the AFL,” Hill said.

“[Clubs have] seen success through the likes of every Irish player that has come before … so it’s a less risky situation, especially when you factor in the additional costs around relocation flights,” he added.

Of the 36 international players who were contracted to the AFLW in 2022, half were Irish.

More than 70 players across the men’s and women’s competition are international imports, but just three — including Collingwood’s Mason Cox — were born in the US.

That is not to say more Americans will not pursue the AFL and women’s competition in the future.

But the relocation was twofold, with the 31-year-old wanting to pursue her new-found passion for Australian rules.

“I’d like to play at the highest level that I can,” Sullivan said.

“That’s partially why I chose to come to the Southport Sharks.”

Sullivan was recently named the best first-year player in the Queensland state league (QAFLW Reserves), despite admitting her experience in the US league was limited.

“Coming here, it was really hard to get confidence,” Sullivan said.

“I kind of played every position and wherever the club needed me … I hadn’t played a full game of 16s (16 a side) before.

“It was really hard to cement where I felt comfortable, especially with learning all the rules, and obviously the competition is at such a higher level.”

‘A bunch of footy fanatics’

Many community teams in the USAFL are a carbon copy of the Australian clubs in terms of branding.

Claire Conley joined the DC Eagles, a side based in the US capital, Washington DC.

While the team hails from the country’s east coast, team colours — and even logos — are almost identical to the AFL’s West Coast Eagles.

“It’s the sense of camaraderie. I’ve moved around the US a lot and everywhere I’ve gone I’ve been able to find a USAFL team,” Conley said.

“They are just a bunch of footy fanatics and it’s really contagious,” she said.

“The sport in the US is growing so fast.”

Marshall said she was optimistic she would not be the last American import to the AFLW if small investments were made in community clubs alongside more resources for US coaches.

“Maybe even mentors — things like that would be really helpful,” she said.

“Even just to facilitate the clubs getting footys … I didn’t have a women’s ball for the whole first year that I played.”

Local fields in the US still do not have goals. Conley joked about the makeshift alternative.

“We have big metal rods that they just … sort of hammer into the ground and it’s PVC pipes,” she said.

Even players who do not have an ambition to play professionally want to see more investment to develop the US branch of the game.

“Part of it is about the actual tangible support things like balls, things like helping us support youth leagues,” Conley said.

“We don’t really have much of a strong youth presence and so that would be really important.”