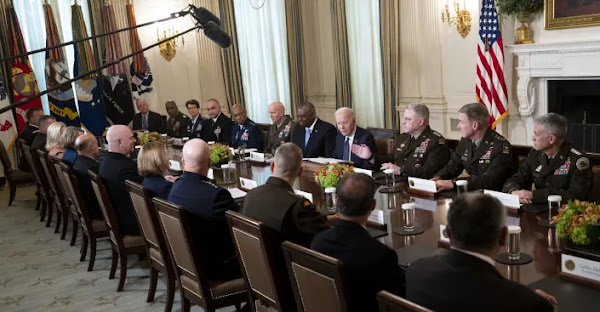 President Joe Biden flanked by Secretary of Defense Lloyd J. Austin III, left, and Gen. Mark A. Milley, the chairman of the Joint Chiefs of Staff, at the White House in Washington, on Oct. 26, 2022. (Doug Mills/The New York Times)

WASHINGTON — A disagreement has emerged at the highest levels of the United States government over whether to press Ukraine to seek a diplomatic end to its war with Russia, with America’s top general urging negotiations while other advisers to President Joe Biden argue that it is too soon.

Gen. Mark Milley, chair of the Joint Chiefs of Staff, has made the case in internal meetings that the Ukrainians have achieved about as much as they could reasonably expect on the battlefield before winter sets in and so they should try to cement their gains at the bargaining table, according to officials informed about the discussions.

But other senior officials have resisted the idea, maintaining that neither side is ready to negotiate and that any pause in the fighting would only give President Vladimir Putin of Russia a chance to regroup.

While Biden’s advisers believe the war will likely be settled through negotiations eventually, officials said, they have concluded that the moment is not ripe and the United States should not be seen as pressuring the Ukrainians to hold back while they have momentum.

WNU Editor: General Milley and the Pentagon is seeing what I am seeing, and it is grim:

(1) The Russian military ceding large swaths of territory without resisting, but exacting a lot of damage on advancing Ukrainian forces.

(2) The complete destruction of Ukraine’s electrical/water/and communications infrastructure. Infrastructure that is vital for Ukraine’s military to function.

(3) Ukrainian forces being systematically degraded, specifically in the Donbas.

(4) The build-up of a massive Russian army that everyone believes will be used in launching a major offensive during the winter months. An offensive force whose size has not been seen since the height of the Cold War..

My gut tells me that General Milley and his staff have crunched the numbers, and they are convinced that in the coming months Ukraine’s military will not be able to stand-up to the Russian onslaught. That the only hope for Ukraine’s military to survive as a viable force is to freeze the conflict right now.

Sadly. I do not think General Milley’s recommendations will accepted. The Ukraine government is not interested in negotiations, and the civilians in the Biden administration want this war to continue, firmly convinced that the Pentagon’s assessment is wrong.

The civilians may have a point. The Pentagon totally screwed it up in their assessment  on how long the Afghan government would survive in 2021, so why not on Ukraine.