Canada dominates but falls short against Belgium, Japan stuns Germany, as it happened 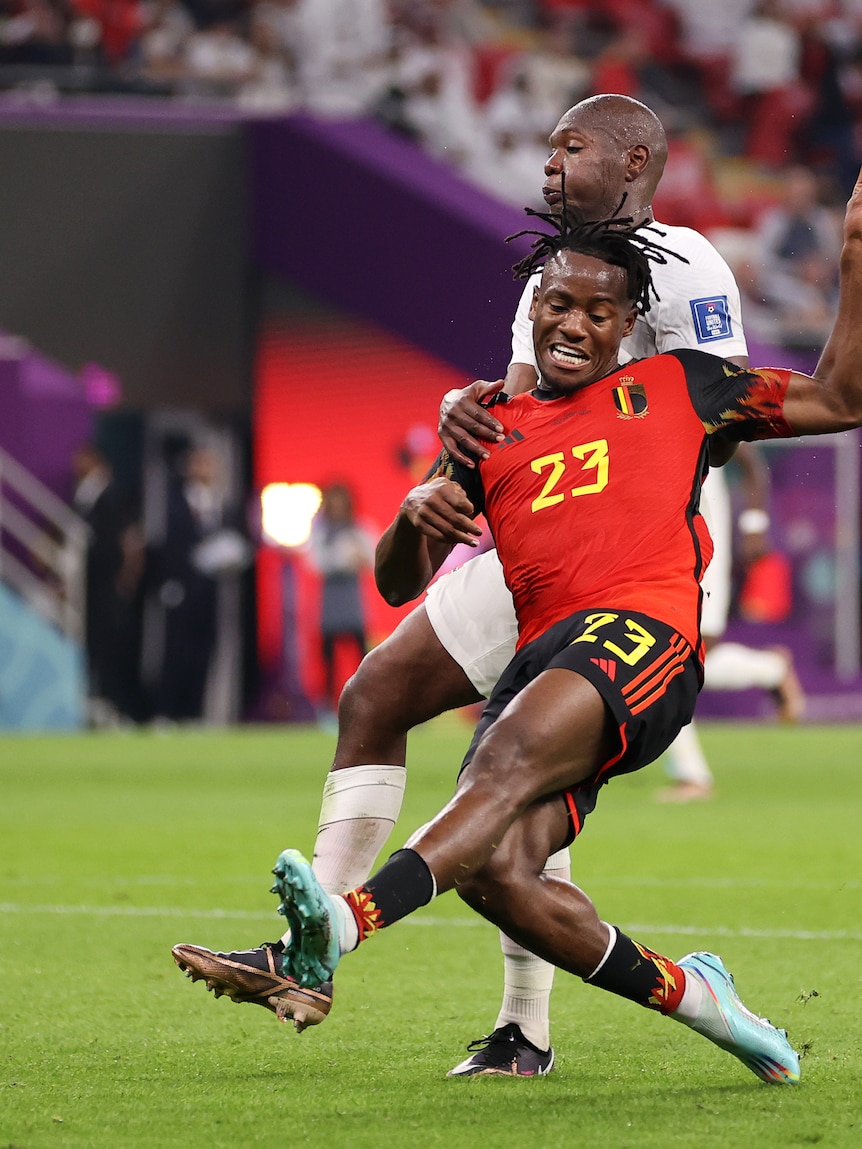 Japan came from behind to beat Germany 2-1, in the second huge upset in two days, following Saudi Arabia’s win over Argentina.

No such worries for Spain, though, who romped past Costa Rica 7-0.

In the late game, Canada were unable to create another upset against Belgium.

And with that, we’ll wrap up the blog for today.

Really looking forward to tomorrow, every match looks like quality, culminating with favourites Brazil taking on a team I fancy a lot, Serbia.

See you back here on the blog.

Groups G and H, come on down! All times AEDT:

Here’s how it looks after one game each.

Belgium controlled the game reasonably well in the second half after going ahead late in the first half.

But really, Canada will be rueing a host of missed chances – or more specifically an inability to take their chances when they found themselves in excellent attacking positions.

They had 21 attempts on goal, almost as many as they did in their whole campaign last time they were in the World Cup, in 1986.

And don’t forget the missed penalty from Alphonso Davies.

Overall a really positive game for them, it will give them hope they can be competitive in this group.

A sepia-tinted amount of stoppage time.

It was a classic De Bruyne run, weaving between defenders before unleashing from the edge of the area – surprisingly though the shot went well over the bar.

Johnston curled in the cross from the right and the substitute Larin got some power on his angled header. It only required an easy dive from Courtois to keep it out though.

Belgium knocking on the door

De Bruyne is orchestrating a series of very dangerous attacks now, as Canada commit men forward and leave gaps at the back.

Laryea this time slides in to stifle a Batshuayi shot with a brilliant tackle and then punches the air in celebration.

After their team cleaned up Germany, Japanese fans helped tidy up rubbish left at the stadium.

They’ve made a habit of this at international sporting events.

How good are Japan fans?

Canada continue to push forward but so far, they’ve been blunt in front of goal.

Belgium seem calmer about the threat at the moment, and always look dangerous on the counter.

Canada needs a spark of some kind.

The second half is underway

Can Canada recover from that late blow? Or will Belgium stamp their class on this match?

Eustáquio does really well to beat his marker and set up Jonathan David, but the forward misses another really good chance for Canada. Following the pattern of the first half.

One of the halves of the tournament so far.

Canada played some thrilling football, dominated the half and missed a penalty — but Belgium scored the only goal.

A superb goal, against the run of play.

Batshuayi belts it home after running on to a ball launched forward from deep by Alderweireld.

Unfortunate for Canada who had the best of the first half, but Belgium’s class has always been evident when they get forward.

Now Buchanan turns a cross over the bar down the other end, what a great chance to equalise!

The Canadians in the crows are shouting V-A-R as we wait and see.

Witsel nudged over Laryea in the box but there didn’t seem to be enough contact.

Nope, not a penalty. We continue.

This is thrilling stuff! Canada are all over them like Maple syrup on a Belgian waffle.

They pour forward again, this time Johnston blasts a shot straight at Courtois.

Now Jonathan David tries a shot and it’s blocked. He had a man free to his right, the pass would have been a better option.

Eden Hazard shows his skill down the left to set up a chance, but Canada scrambles it away and deals with the resulting corner.

Then it’s a race down the other end as Belgium scurry back to deal with the counter attack.

End-to-end stuff as De Bruyne finds space and pushes it to Hazard again, but he’s coralled by the Canadians.

This game is going at a hectic pace, if you can’t tell.

Atiba Hutchinson has a poor shot from distance after excellent work from Davies to set him up.

Canada taking it to Belgium

This is thrilling stuff from the Canadians, whose pacy forwards are bombing down the channels and testing the out Belgium’s veteran defenders.

Alphonso Davies can’t beat Courtois, who dives low and to his right!

Arguably the best goal keeper in the world has thwarted Canada’s star man.

A real shame for Canada who have started brilliantly. Can they continue this? It seems so, they are still piling the pressure on to Belgium.