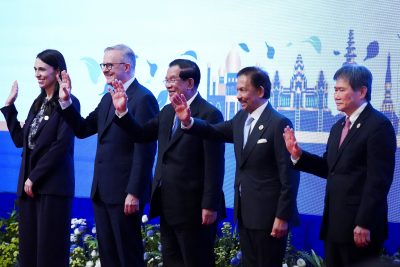 After the successes of Indonesia’s G20 and Thailand’s APEC summits last month, East Asia’s ability to broker consensus in the face of mounting geopolitical tensions has caught the world’s attention. As India takes on the G20 presidency, Indonesia the ASEAN chair and Japan the G7 presidency, 2023 is a year that offers the region a unique opportunity to capitalise on its advantages and shape the multilateral agenda for the rest of the decade.

East Asia is one place where multilateralism and integration still have a fighting chance against protectionism and hyper-nationalism. Asia’s homegrown multilateral institutions — including ASEAN and its Treaty of Amity and Cooperation, the ASEAN Regional Forum, East Asia Summit and now the Regional Comprehensive Economic Partnership (RCEP) — are powerful instruments for integrating the security and economic domains through multilateral rule-making and cooperation.

But East Asia is trapped at the epicentre of geopolitical tensions — and with globalisation having diffused political and economic power, no single country can unilaterally secure its resilience and sovereignty. Instead, strength and security must be found in cooperation, in coherence and in a comprehensive approach. This dynamic is accentuated by the nature of new economic and environmental threats: one country’s resilience to climate change, or access to free and well-supplied markets for energy and food doesn’t come at the expense of others’.

Today, we launch the new issue of East Asia Forum Quarterly, which explores what comprehensive regional security means and how it offers the region a pathway out of a future overwhelmed by the spillover effects of great power competition.

Comprehensive national security has long been a feature of East Asian policy thinking. While the economic and structural reform efforts that drove much of Asia’s growth after the Second World War were importantly the responsibility of national governments, they were crucially enabled by multilateral institutions and political support through international and regional cooperation. By bringing economies closer together, facilitating dialogue and building habits of cooperation and consensus building, East Asia’s economic architecture has been constructed on overlapping regional interdependencies.

Since it was formalised in national policy beginning in the 1970s, Japan’s sogo anzen hosho (comprehensive national security) approach has seen effective national security as going well beyond military preparedness to encompass a variety of areas, now often referred to as ‘non-traditional’ security issues. This philosophy has underpinned its pursuit of non-military security objectives — especially access to overseas markets and key natural resources imports — through diplomatic means. In pursuit of this goal, Japan has championed multilateral economic liberalisation and institution‑building, and the whole of Asia has been the beneficiary.

Similarly, ASEAN’s Treaty of Amity and Cooperation in Southeast Asia — a legally-binding, if rarely enforced, code for interstate relations between signatories — has sought ‘to promote perpetual peace, everlasting amity and cooperation’ among members since 1976. It now has 49 non-signatories, including representatives from all populated continents, demonstrating the value of its principles beyond the region. The advent of the ASEAN-centred RCEP, which features an in-built platform for economic cooperation as part of its mandate, offers an opportunity to operationalise the key economic elements of comprehensive security within its membership.

But security across the region has historically been underpinned by the US alliance framework. With the US’ bilateral and multilateral engagement with the region increasingly focused on curtailing Chinese influence, and with China’s diplomatic assertiveness and use of economic coercion receiving censure from the G7, East Asia has become another battlefield for great power competition.

The worry is that countries are tacitly being invited by the great powers to choose a side — eroding their autonomy and limiting their ability to ensure their own comprehensive security. The bilateral meetings between states in conflict in the margins of the November summits in Southeast Asia suggest there may yet be a path towards open dialogue and dispute resolution at some time.

The new vocabulary of securitisation, developed in Western capitals and Beijing alike, in the face of growing geopolitical tensions — decoupling, dual circulation, friendshoring, ‘strategic’ supply chains, securitisation — suggests at first glance that the great powers are working towards a comprehensive security of their own.

There is nothing comprehensive — and certainly nothing regional — about the approach of the big powers. Instead, it subordinates key national interests to a process of geopolitical competition that is, by its nature, a zero-sum game. Securitising the economic arenas that have facilitated the mutually beneficial, cooperatively‑achieved growth of the past 70 years has only unwelcome externalities for the rest of the world. They also undermine the economic openness, growth, and adaptable supply chains that are the real fundamentals of comprehensive security in an interconnected global economy.

In our lead article this week, Shiro Armstrong makes the case for a comprehensive regional security framework that affirms commitment to multilateral economic rules and seeks to ensure a free, open, inclusive, prosperous and politically stable region.

East Asia could use its 2023 multilateral leadership gigs to set an agenda for the region in which ASEAN members and dialogue partners work collectively towards comprehensive regional security. By demonstrating that cooperation on a range of traditional and non-traditional security elements can still succeed in the face of geopolitical pressures, East Asia can begin its transition to a stable, multipolar regional order — and chart a path for the rest of the world to follow.