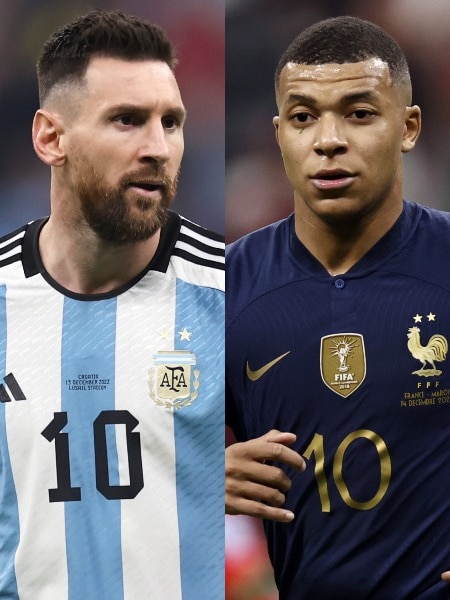 Argentina and France will meet in Qatar 2022 FIFA World Cup final after the 32 teams have been whittled down to the final two over the course of the last month.

The match, at the Lusail Stadium, takes place in the early hours of Monday morning in the eastern states, and late Sunday night in the west.

Who is in the World Cup final?

Argentina will meet France in the World Cup final.

France are the reigning world champions, having beaten Croatia 4-2 in Russia four years ago.

Argentina are the reigning South American champions, having won the 2021 Copa América with a 1-0 victory over Brazil at the Maracanã.

That was Argentina’s first Copa América victory since 1993 and a real monkey off their backs, given it was La Albiceleste’s first major title with Lionel Messi in the team.

What’s the head-to-head record between Argentina and France?

However, in the only knockout match between the two teams, France won 4-3 in a thriller to progress to the quarterfinals in Russia.

How did Argentina get to the World Cup final?

Argentina topped Group C, but not without a major blip in their first game, when Saudi Arabia inflicted a humbling 2-1 defeat.

Consecutive 2-0 victories over Mexico and Poland ensured the Argentines topped the group though.

In the last 16, Argentina appeared to be cruising to victory over the Socceroos until a deflected goal from Craig Goodwin sparked a major revival from the Aussies, who were, in the end, unlucky not to take the game to extra time.

That set up a ferociously bad-tempted quarterfinal against the Dutch, which ended 2-2 after 120 minutes, the Argentines going through on penalties 4-3 — and letting the stricken Dutch know all about it to boot.

Argentina then cruised past a well-beaten Croatia side to set up the spot in a sixth World Cup final and first since 2014.

How did France get to the World Cup final?

France had no such troubles at the start of their campaign, easing past the Socceroos 4-1, despite conceding first.

A 2-1 victory over Denmark ensured qualification, meaning their reserves’ 1-0 defeat by Tunisia meant little in the grand scheme of things.

Poland offered little resistance in the last 16, setting up a massive quarterfinal clash with England.

Despite being outplayed for long periods, the French managed to stick the dagger into English hearts thanks to Harry Kane’s late penalty miss and secure a 2-1 win.

Surprise semifinalists Morocco stood between Les Blues’ and another World Cup final and, despite again failing to stamp their authority on the match, France had enough quality to secure a 2-0 victory.

Is this a match between Lionel Messi and Kylian Mbappé?

No, it’s a match between France and Argentina.

But the two Paris Saint Germain teammates will no doubt have a huge role in their respective team’s fortunes.

Messi has been superlative throughout the tournament so far, dominating matches almost single-handedly, laying goals on a plate for his teammates when he can’t score them himself.

Mbappé is one of France’s best players and, despite still being only 23 years old, was firmly on the radar as a French saviour in 2018, but arguably has been cast into the shade by the form of Antoine Griezmann in the knockout rounds.

Both men have scored five goals each though and lead the golden boot tally.

Messi wrestling with the ghost of Maradona

In 1986, they were captained by Diego Armando Maradona.

Aside from the U20 World Cup in 1979, that was the only major honour Maradona won with Argentina — he did not play a game when Argentina won the Copa América in 1991 and 1993.

But such was his force of personality, Maradona has loomed large over all subsequent Argentina players and captains, but none more so than Messi, the man who adorns his number and has taken up his mantle as the nation’s — and arguably the world’s — best player.

Maradona and Messi are inextricably linked — amongst other reasons, they are the only two players to have been named the best player at an U20 and senior men’s World Cup.

However, fairly or otherwise, winning the World Cup has been seen by some as the only way Messi can shrug aside the comparisons with Maradona and stand on his own two feet as a modern great.

Messi has already been the best player at this year’s tournament, but if he can just take that final step, that will cement his enduring legacy in stone.

They are the first team since Brazil in 2002 to reach back-to-back finals, and first team from Europe to do so since West Germany in 1990.

Argentina have actually achieved that feat before, reaching consecutive finals in 1986 and 1990.

In 1986, they stopped West Germany from winning consecutive World Cups by beating them in the final.

This year’s final will, in fact, be the third time that Argentina have met a team that is playing in their second consecutive final.

On both previous occasions, against the Dutch in 1978 and West Germany in 1986, Argentina won — scoring three goals in each final.

When is kick off?

The match will kick off at 2:00am AEDT, so New South Wales, Victoria and the ACT.

That’s 1:00am (AEST) for our Queensland readers, 1:30am in South Australia, 12:30am in the Northern Territory, and 11:00pm on Sunday night in Western Australia.

How can I watch the World Cup final?

The match will be shown live on SBS TV and SBS On Demand.

You can follow all the action in our ABC Sport live blog from 12:30am AEDT.