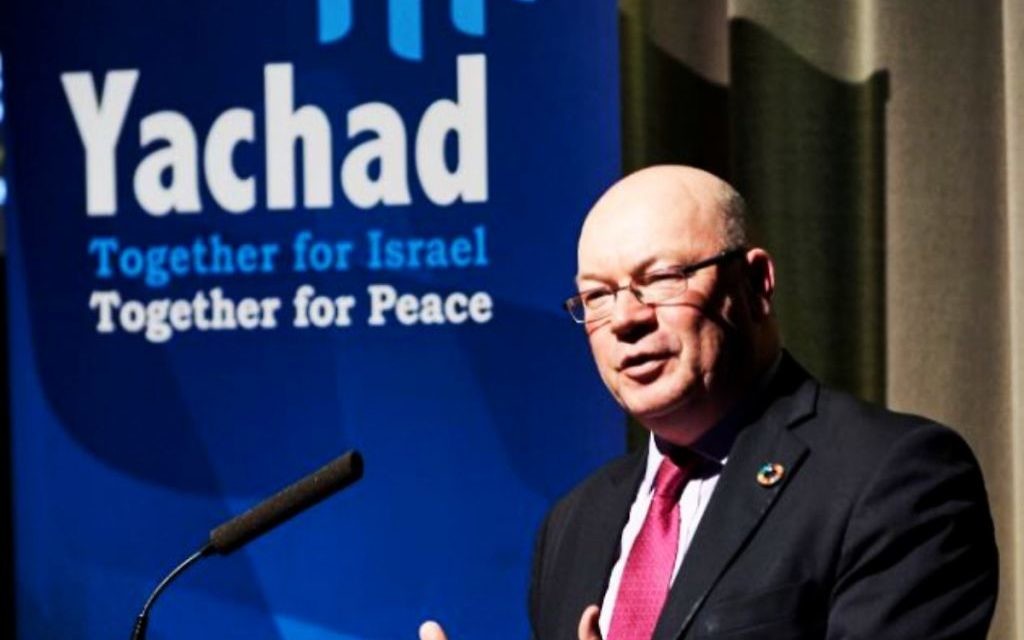 Former Middle East minister Alistair Burt has warned that British politicians are finding it “more difficult” to criticise the actions of the Israeli government without their support for the Jewish state “being called into question.”

Calling for help from British Jews to resolve a situation he described as being “highly dangerous”, the former Conservative MP told an audience at an event held at Muswell Hill Synagogue:”I have to tell you it has become difficult – and I think that is wrong.

“It’s become more difficult  for politicians to criticise the actions of the government of Israel, without their support for the state of Israel being called into question.

“That’s highly dangerous. You have to make sure in the UK you give your politicians the license to criticise the government and not feel they are in any way anti Israel or anti the state itself.

“You have to make sure in the UK you give your politicians the license to criticise the government and not feel they are in any way anti-Israel or anti the state itself.

“If you get into a situation where you cannot criticise Israel  justifiably you are moving into dangerous territory. You would not accept it in relation to our politics.

“The diaspora here should make sure people don’t accept it in relation to Israel. ”

Burt, who had two widely praised spells in the foreign office, stressed that he would never flinch at “calling out antisemitism when it is there, there is no doubt about that.”

But the ex-MP for Bury North, and north east Bedfordshire, and long-time supporter of Israel, added that criticism of the actions of the Israeli government was not always antisemitic.

“We have got ourselves in difficulties over this,” he added.

Burt, who was speaking at an event organised by the group Yachad, and attended by Muswell Hill’s Rabbi David Mason,  spoke of his horror and anger over Wednesday morning’s terror attacks in Jerusalem, that killed a 16 year-old boy, and wounded a further 22 people.

In discussion with Jerusalem expert and commentator Danny Seidermann, the former minister berated the lack of credible leadership amongst the Palestinians, and warned he feared the situation could quickly deteriorate in Jerusalem and elsewhere in the region.

He spoke of his fear that many young Palestinians currently had little hope in their lives.

“That sense of hope young people need is just not there,” he said.

But Burt stressed:” That is no justification, that is no excuse for the action that took place this morning, (in Jerusalem).

“It’s no justification, but the danger of nothing else going on is becoming startlingly clear.”

Burt warned again:”There’s nothing going on, the only thing that will shake this is something bad.”

He called on colleagues in the international community, some who had grown tired of the conflict,  to “reflect on what has happened” and warned he feared “the worst possible outcome.”

Reflecting on the rise of the far-right in Israel, and likely inclusion of  Itamar Ben Gvir and Bezalel Smotrich as cabinet ministers Birt said “both are going to have to travel” outside the Jewish state.

He added:”One is certainly not going to come to the UK because he got a conviction for terrorism.

“You have an Israeli minister who  is going to be refused entry into this country – that is something we have never never had to contemplate before.

“And the other was told by the Board of Deputies to get back on a plane.”