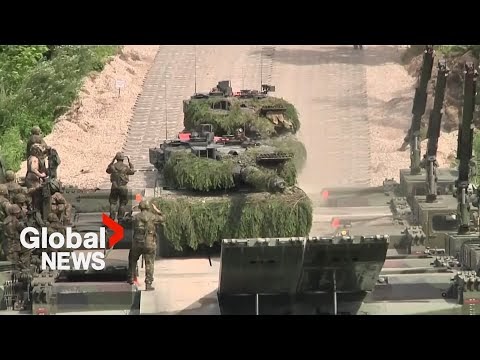 BBC: US and Germany ready to send tanks to Ukraine – reports

After months of reluctance, the US and Germany reportedly plan to send tanks to Ukraine, in what Kyiv hopes will be a game-changer on the battlefield. US President Joe Biden’s administration is expected to announce plans to send at least 30 M1 Abrams tanks.

Russia’s ambassador to the US blasted the news as “another blatant provocation”.

Ukrainian officials have said such shipments could help its forces seize back territory from the Russians.

Until now, the US and Germany have resisted internal and external pressure to send their tanks to Ukraine.

WNU Editor: The last time German tanks were used in this part of the world it ended very badly for Europe as a whole. My cousin in Moscow called these reports of the US and Germany planning to send tanks to Ukraine “Operation Barbarasso 2“.

Sighhh …. Russians are about to see German tanks gunning for them over the horizon. Westerners have no idea on what passions this will raise in Russia.

This is really bad. Everyone I know in Russia is now convinced that NATO is about to engage in a hot war with Russia.

I have also been told that Moscow bluntly told Germany that this crosses a red-line. That once German Leopard tanks are engaged against Russian forces, President Putin will announce a General Mobilization. He will state that this deployment has broken treaties with Russia on the use and deployment of German military assets, and Russia must respond.