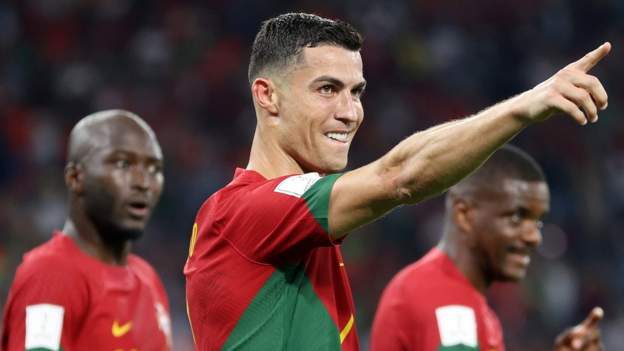 Cristiano Ronaldo became the first man to score at five Fifa World Cups as Portugal began their campaign with a thrilling victory over Ghana.

Ronaldo was playing for the first time since his controversial television interview last week and his subsequent release by Manchester United following the comments.

And the 37-year-old scored the opening goal from the penalty spot, hammering in after being tripped in the box by Ghana’s Southampton defender Mohammed Salisu.

Captain Ronaldo had a couple of chances early on but a low shot was smothered by Lawrence Ati-Zigi and he also headed wide at the far post.

The forward had a goal disallowed for a push on Alexander Djiku while at the other end, Ghana did not have a single shot in the opening period.

The Africans improved in the second period as Mohammed Kudus drilled narrowly wide of the far post and got their reward when Andre Ayew equalised from close range.

But Portugal responded with two goals in two minutes to seal the points – Joao Felix converting a delightfully clipped finish and substitute Rafael Leao coolly stroking in just seconds after coming on.

Osman Bukhari headed in a late consolation for Ghana and there could have been real drama in the ninth minute of stoppage time.

Goalkeeper Diogo Costa put the ball down, seemingly unaware Inaki Williams was behind him, but after racing to intercept the ball, the Ghana forward slipped at the crucial moment and a scuffed shot was cleared off the line.

The focus before this game was on just one man – Ronaldo.

The veteran forward came into the tournament with a cloud over his head following the explosive TalkTV interview where he said he felt “betrayed” by Manchester United.

Unhappy with what he had to say, the Premier League club initiated a process to terminate his contract, which was confirmed on Tuesday.

But the player will be in the headlines for all the right reasons this time, as he surpassed the great Pele, Uwe Seeler and Miroslav Klose to stand on his own by scoring at five different editions of the tournament.

Supporters were on their feet in anticipation every time Ronaldo got anywhere near the ball and they erupted when his strike from the penalty spot in the second half – which came after relatively easy missed opportunities in the opening period – hit the back of the net.

It was also a record-extending 118th international goal, which includes eight in the group stage of the World Cup, though he is the player with the most strikes without netting in the knockout stage.

Felix’s sumptuous finish and Leao’s nerveless effort looked to have sealed the points for Portugal with 10 minutes remaining.

Substitute Bukari headed in and celebrated with Ronaldo’s ‘Siu’. Otto Addo’s side would have been delighted with a draw and almost got it, but for Williams’ slip.