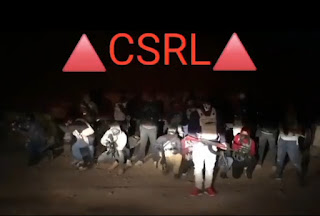 A heavily armed mob of hitmen under the command of José Antonio Yepez Ortiz aka El Marro scream out before the camera their threats against Santiago Quiroz Zermeño.
Video translation is as follows:
Sicario #1: Zermeño, you son of bitch we’re all here. Come on out to that armed confrontation you piece of shit jerk off son of a fucking bitch. You and your gang of jerk offs are clueless to the fact that we’re in position here you son of a bitch. We’re coming after Beto, Lobo, and the rest of your gang of cowards. The only ones who will rule here are El Marró and his mob you sons of bitches.
Sicarios scream in unison: Long live El Marro!
Sicario #2: Long live El Marro you son of a bitch. You son of a whore were coming after you…