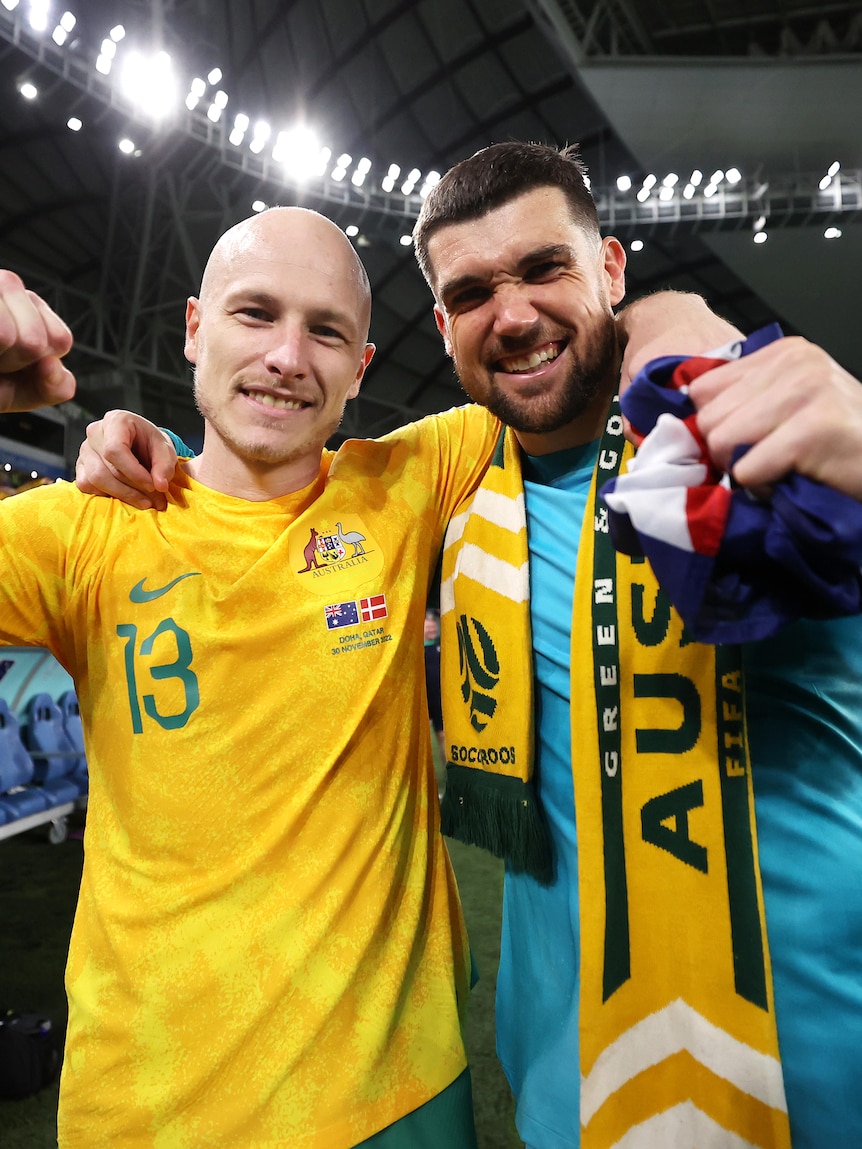 Where were you when it happened? When it felt like everything changed?

Were you curled up somewhere in your living room, a blanket over your knees?

Were you in a public square at 4am, squeezed up against the shoulders of strangers? Or, maybe, you were there, in the wide open hand of the stadium; one face in a small flourish of green and gold that, in a blink, filled up the horizon of the whole world?

Do you remember what it felt like, the shape and heft of that roar? Do you remember the arc of the ball as it left Mat Leckie’s foot and rolled, as if shepherded by some invisible hand, into the bottom corner of Kasper Schmeichel’s net? Can you hear the sound of the page turning?

Socceroos head coach Graham Arnold is staring up into the dark sky above Al Janoub Stadium in southern Doha.

The trumpets and bells of the national anthem swell around him as he gazes into the inky blackness, seeing nothing but the white lip of the rooftop that crests like a wave over the 40,000 people and the history piling in below.

He sings the words of the anthem as if they are a prayer, a hymn sent out into this grand cathedral of steel and turf and glass.

Arnold is not a religious man, but coming into this final group-stage match against Denmark — an encounter that is about so much more than just that — he needs all the help and hope he can get.

The biggest question coming into this game was whether the Socceroos could match the energy they harnessed in their thrilling 1-0 win against Tunisia.

Barely a minute had passed before we got the answer: Christian Eriksen — Denmark’s born-again beating heart — has already ghosted in behind Australia’s centre-backs and rifled off the game’s first shot; a reminder of just how easily all this can be done and undone.

“Oh no,” someone near me whispers. Socceroos disciples have seen this film before. We know how it usually ends.

The Socceroos do not play against the Danes in the first half so much as weather them, shuttering their windows and barricading their doors against the oncoming red storm.

This is not a game of fight and fire. This is not another Tunisia. This is a game of struggle and suffering, a war of attrition, a rationing of packets, a quiet waiting-out in the shadow of a bunker.

Mitch Duke — the header hero from a few days ago — has been chasing shadows. He tries to muscle his way past Denmark’s towering centre-backs but is quickly suffocated back into line.

Riley McGree tries next, skipping towards the top of the box after the ball somehow falls his way, but the Danish defence comes crashing in before he has a chance to blink.

This is how the first half unfolds: a seemingly endless period of pressure, and a feeling of creeping inevitability.

The Danes are taller, stronger, faster, and slicker as they slice the sluggish Socceroos apart.

From the opening whistle, the Socceroos have moved at half-pace, as though the heat of the Doha day had become something solid, something they had to wade through, like soldiers waist-deep in a bog.

But they have been here before, this band of brothers.

The past four-and-a-half years have been one long night spent with their backs against the Earth.

They know how it feels to suffer. They had one of the longest World Cup qualification campaigns in history, 20 games spread out over 1,000 endless days, with several pandemic lockdowns grinding them down in between.

Their results had slumped, their squad lacked depth, their domestic league was waning, and they watched the faith of a once-adoring public start to fade, eclipsed by the long shadow of the ‘Golden Generation’, against whom they have always been measured.

So they throw themselves at Denmark, this pack of desperate men.

It is not pretty or clean or choreographed. It is messy and ugly and raw. They did not come all this way only to pretend they are not who they are, that they are not everything they have been through, that they have not been hardened by all this and more.

“What we’ve been through, these four years, it hasn’t been easy,” Socceroos defender Aziz Behich said.

“The qualification process has just made us stronger, with COVID, a lot of people writing us off during those play-offs. But we kept that noise out.

“What this group is capable of, I’m not sure where it can stop.

“Right at the beginning, when Arnie took over, that was the first thing he wanted to make sure we had: that camaraderie, that brotherhood, that friendship. That was the main thing.

Arnie said that when Australians’ backs are against the wall, when you have that bond in the change room, the world’s your oyster.

“We had that period — the golden generation — they helped us on the map. People respected us more. But that died out a little bit,” Behich said.

“Hopefully, we’re the next step helping the younger guys earning a bit more respect. In all honesty, if I could sum it up, it’s the graft for us Australians.”

Arnold had spoken about keeping emotions in check, but this game was all about feeling.

So, in the second half, they proved it. The Socceroos slowly made up ground, inching forward together.

The Danes pressed further, squeezing them in from both sides, trying to cleave them in two.

Everyone defended as though their lives depended on it.

An Eriksen corner is fizzed across goal, the nearest chance yet, the scrape of an exposed nerve.

And that’s when it happened. Like a bolt out of the air.

After an hour of fighting against what felt like the inevitable, the ball spins out of the yellow trench and falls to the young McGree.

He’s almost shocked to have received it, unfamiliar with the feel of it on his toe. He turns into the unusual green country beyond and sees just one man, one moment.

Do you remember where you were?

“I had one more man to beat,” Leckie said of what happened next.

“First, I wanted to cut inside, and he sort of went that way. So, just in the moment, I went left again and swung the left boot. Then I saw the ball was rolling in.

“You saw the emotion. I didn’t really know what to do. I was just pounding my chest. Once the boys got together, the whole bench was there.

“It just shows how much of a team we are, whether the boys are starting or coming off the bench or not getting any game time. Everyone’s there for each other.

“As a young boy, you dream big. When I decided that I wanted to [be] a footballer, watching the Socceroos could’ve been the reason in the back of my head [for] why I committed to being a footballer.

“It’s moments like this that build the game and, potentially, give young kids inspiration to go on and want to be a footballer one day.

“I think it’s possible if you give everything. That’s something I always strived to do when I was a young guy. Head down, work hard. I think that’s one of the main reasons why I’ve had a fairly successful career, because of my drive and my fight.

“Hopefully, that moment today and the result inspires other kids.”

Arnie’s message to the Socceroos

As the last remnant of the Socceroos’ “Golden Generation”, Arnold has been this team’s great historian, its keeper of secrets, its translator of lore, its final true believer.

He has kept the old spirit alive, and now, with this group of 26 young men, has taken this team back to where he always knew it could be, even if nobody else did.

Whatever happens next against the might of Messi’s Argentina, this old grey Socceroo’s legacy is already set in stone. He has not just shown us who we are, but also who we can be.

“When we first got together, this is what [Arnold] said: ‘I want to create the greatest Socceroos team ever’. And that message has been an underlying message and motivation that’s carried us through the whole four-and-a-half years. With all the hindrances that we’ve had.

“There’s so many things that add up. But the only thing, when it’s done, it has created enormous strength from within. And everybody [is] buying into that. The greatest Socceroos team ever.

“To do that, we had to qualify for the World Cup. We knew from the word go that we were going to do something special.

“Now these guys are heroes for a lifetime.”

Arnold is looking up into the sky. The trumpets and bells are swelling. Now the whole country is there, standing by his side, following his gaze into a future that we have never known but which we have always, always dreamt about.

Do you remember where you were? Can you hear the sound of the page turning?