In Malaysia, incumbency isn’t all it used to be 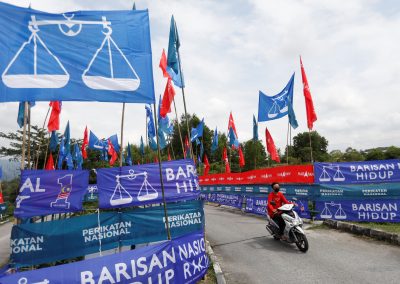 Next Saturday Malaysia’s 21-million strong electorate — recently enlarged by more than 6 million people after the lowering of the voting age from 21 to 18 — will elect 222 members of the lower house of parliament in the country’s 15th general election, known universally as GE15.

They’ll have to choose between three party coalitions, each headed by current or former warlords from the UMNO party that ruled Malaysia as the head of the Barisan Nasional coalition from independence in 1957 until the watershed elections of 2018. That was when the opposition Pakatan Harapan coalition headed by former UMNO strongman Mahathir Mohamad knocked the disgraced Najib Razak and Barisan Nasional out of office.

The two strongest of these coalitions are vying for a comeback. The reformist, multiracial Pakatan Harapan, now under the leadership of Anwar Ibrahim, wants a second chance at governing after it fell apart amid infighting in early 2020. Barisan Nasional, now more dominated than ever by UMNO, is talking up its chances of retaking majority government in its own right after being reduced to partner status in the governments of prime ministers Muhyiddin Yassin and now Ismail Sabri Yaakob. Sabri, himself an UMNO man, leads an unwieldy coalition of coalitions that was pieced together as part of his predecessor Muhyiddin’s 2020 move to depose Pakatan Harapan, then expanded as part of his own move to knock off Muhyiddin in 2021.

With UMNO having settled all too comfortably back into government, albeit in a coalition of coalitions with former prime minister Muhyiddin’s Perikatan Nasional bloc, it’s tempting to write off GE15 as a foregone conclusion. Certainly, the momentum seems to be with UMNO after a string of Barisan Nasional victories in state elections, and Malaysia’s electoral system is notoriously gerrymandered in favour of the rural Malay-majority seats that are historically UMNO’s base.

As William Case writes in this week’s lead article: ‘Notwithstanding the uncertainty that infects this election, the betting this week is that UMNO will fare best, perhaps poising it to stage a full recovery’.

Certainly, polls show the Barisan Nasional coalition in a virtual dead heat with the reformist Pakatan Harapan coalition. Malaysia’s leading pollsters, the Merdeka Center, estimate Barisan Nasional securing 24 per cent support, two points behind Pakatan Harapan; the Perikatan Nasional (PN) coalition headed by former PM Muhyiddin has 13 per cent, while 31 per cent of voters said they haven’t yet made up their mind. It’s possible that none of these coalitions will win a majority, leading to another ‘coalition of coalitions’ to form a viable government after the election.

But aggregate polling trends at best offer hints: what matters is how the parties’ support is geographically distributed in Malaysia’s first-past-the-post system, which is marked by serious problems of malapportionment that the short-lived Pakatan Harapan government didn’t remedy. Barisan Nasional deliberately entrenched this problem over decades because it helped prevent periodic surges in support for opposition coalitions — and particularly among Malaysia’s large Chinese and Indian ethnic minorities — from threatening its rule. For this reason, Barisan Nasional could easily come in well behind its key rival, Pakatan Harapan, in the popular vote and still end up ahead in the seat count.

If lightning strikes twice for Pakatan Harapan it will be because smouldering discontent with the economy translates into a protest vote big enough to overwhelm the inequities in the electoral system. Three quarters of respondents in Merdeka Center’s poll said the economy was the top problem facing the country, with inflation coming up first when they were asked to name their most important issue for them personally. Malaysia’s growth, unemployment and poverty rates are on their way back to pre-pandemic levels, but the economic and social scars of lockdowns haven’t fully healed, and as a relatively trade-dependent economy — international trade represents 131 per cent of its annual GDP compared to 40 per cent in Indonesia — the country remains vulnerable to the global slowdown that’s just around the corner.

Yet the incumbents are advantaged by their ability to deliver government benefits to the grassroots. Windfall revenues from oil and gas helped limit an overall decline in revenue in the 2023 budget, tabled in October just before the election was called. That allowed the government to promise tax cuts, and extra transfers for low-income households, even while winding back spending from pandemic-era peaks.

What’s at stake in this election for our understanding of Malaysia’s political evolution in the long aftermath of the 2018 elections? Case argues for a glass half full view of Malaysia’s ‘hybrid’ political system — that is, one in which elements of democracy and authoritarianism coexist.

‘For Malaysia’s political class’, he reckons, ‘hybrid politics remain the only game in town’. That Pakatan Harapan failed to deliver a new politics after its 2018 victory suggests that ‘Malaysia cannot sustain a transition to “full” democracy’ just from kicking UMNO and BN out of office, because reformists must govern amid the deep social divides and politicised state apparatus created by decades of UMNO rule.

But the post-2018 interruption of UMNO’s dominant-party rule has ushered in a new era of fluidity and competitiveness — within certain parameters — that has empowered voters despite all the inequities of the electoral system. As Case says, the fact that GE15’s outcome isn’t totally predictable even with an UMNO-aligned government in power is ‘testament again to the democratic content still found in hybrid politics’.