Is It Costing The U.S. ‘Peanuts’ To Defeat Russia? 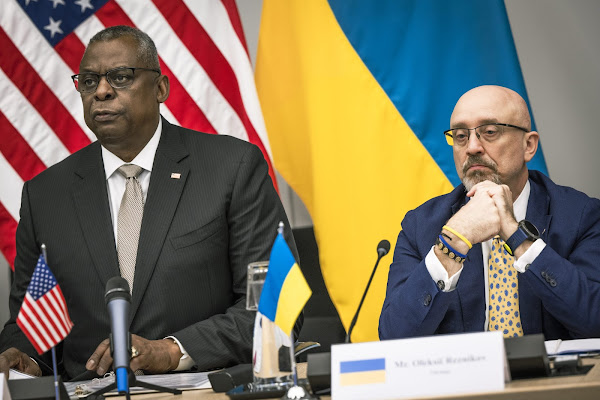 Photo: Secretary of Defense Lloyd J. Austin III and Ukrainian Minister of Defense Oleksii Reznikov at the sixth meeting of the Ukraine Defense Contact Group at NATO headquarters, Brussels, Belgium, Oct. 12, 2022. This is the the sixth such meeting of defense leaders from around the world since Russia’s unprovoked and unjustified invasion of Ukraine. Credit: DoD photo by Chad J. McNeeley

Timothy Ash, CEPA: It’s Costing Peanuts for the US to Defeat Russia

The cost-benefit analysis of US support for Ukraine is incontrovertible.

It’s producing wins at almost every level. Former President Trump, and others in the US including some Democrats as well as Republicans, have criticized continued US support for Ukraine in its war with Russia. They have called for military and financial support to Ukraine to be cut, even ended. They downplay the risk from Russia and argue that the money should be spent at home.

Yet from numerous perspectives, when viewed from a bang-per-buck perspective, US and Western support for Ukraine is an incredibly cost-effective investment.

Altogether, the Biden administration received Congressional approval for $40bn in aid for Ukraine for 2022 and has requested an additional $37.7bn for 2022. More than half of this aid has been earmarked for defense.

Update: How Sending Aid to Ukraine is Saving the U.S. Billions of Dollars (Newsweek)

WNU Editor: The above CEPA analysis is not only short sighted and oblivious to medium and long term consequences, but it is also insane. This analysis also illustrates how dangerous Washington’s foreign policy establishment has become. That reports like this are published and publicized with no blow-back or criticism.

It is not going to cost billions to defeat Russia. It is going to cost the U.S. tens of trillions of dollars if Russia is defeated. Russian nuclear doctrine is very clear. If Russia is facing defeat in a war, nuclear weapons will be authorized and used. And the US will be a target.An inconvenient fact that the above CEPA author ignores.

Fortunately. I doubt that such an outcome is going to happen. What I believe will happen is that after 2 or 3 years of heavy fighting, Ukraine will capitulate in this war, and it will be on terms that will favor Russia. But while the cost for Ukraine will be astronomical, I am the first to admit that the costs for Russia will also be high. It is a warning that I posted numerous times before the war started, and it is one that I still believe in.

But in almost every conflict the victor always get stronger. It happened for the US after the Civil, First, and Second World Wars, and the same will happen for Russia after this war.

But after this war is over the US will then be facing a very hostile super-power that will want its pound of flesh. The anger against the US government in Russia is something that I have never seen in my lifetime, and they are blaming Washington for the events that lead to this war, and for the war itself. And this anger is increasing everyday.

What that means is that in the future when the US is engaged in a conflict, as the US always finds itself in, the other side is going to be armed to the teeth with Russian weapons. The wars in Iraq and Afghanistan cost the US trillions in dollars, and thousands of lives, and against an opponent that did not have the resources and weaponry that the US had. In the next conflict the US will be engaging with an opponent that will be heavily armed and supplied by Russia.You can take that to the bank.