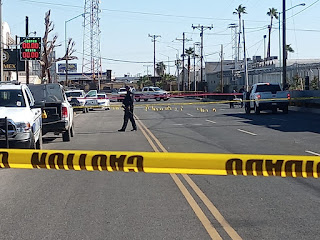 In a prolonged chase that culminated in a confrontation, municipal and state police officers killed and detained “Los Rusos” hitmen, including a leader of the group known as “El Plaga”.

The events occurred around 7:00 a.m. in the Alamitos neighborhood of Mexicali, where the alleged criminals were intercepted by members of the State Citizen Security Force (FESC), when they were driving a Rubicon vehicle.

A chase ensued in which other police forces joined in.

Municipal agents came face to face with the hitmen’s truck, with whom they clashed with gunfire.

The criminals’ high caliber weapons surprised the uniformed officers, but they managed to take cover and repel the aggression, killing one of the two involved.

“El Plaga” is considered one of the operators close to Jesus Alexander Sanchez Felix, alias “El Ruso,” the alleged operator of the dominant group in Mexicali.

Originally from Culiacán, Sinaloa, he has a criminal record dating back to 2016, when he was arrested in possession of several firearms while driving on the highway.