No winners in the Indian National Congress presidential race 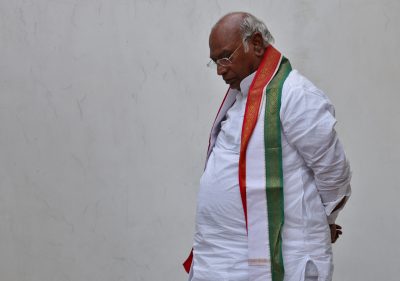 India’s grand old party, the Indian National Congress (INC), has elected a new president. This should not be big news, but it is the first contested election in two decades and only the sixth in INC history. It is also the first time since 1998 that someone not named Gandhi has held the post. But the prospects of this exercise in party democracy reviving the INC are slim.

As the tortuous process and predictable outcome make clear, the INC has still not overcome its dependence on one ruling dynasty. Its difficulties are deeply rooted in its history and practice of elevating a single leader to a position of charismatic authority beyond democratic accountability. This practice originates in the leadership that ‘Mahatma’ Mohandas Karamchand Gandhi (no relation to today’s Gandhi dynasty) exercised over the independence movement and persists in part because India’s regional diversity makes it difficult for most leaders to appeal nationwide.

With Gandhi’s death, the charismatic mantle passed first to Jawaharlal Nehru, the first prime minister, and then to Indira Gandhi, the third prime minister and Nehru’s daughter. Both enjoyed personal popularity and electoral success that were unmatched until recent years.

But the continued charismatic authority enjoyed by — or perhaps thrust upon — Indira Gandhi’s descendants owes less to their popularity, which has been declining steadily, and more to the internal dynamics of the INC. The existence of a charismatic ‘supreme leader’ has long allowed losing factions in regional units to appeal against more popular regional leaders. These appeals are usually to a national leadership that is often itself little more than a coterie around the supreme leader. This has led disgruntled regional leaders with a significant popular base to exit the party, leaving only those whose political survival depends on support from the single central leader to lead state units. Both factors were on display in the recent contest.

The momentum towards the recent elections began when the previous party president Rahul Gandhi, Indira Gandhi’s grandson, resigned following the INC’s disastrous showing in the 2019 elections. Rahul was replaced by his mother Sonia as interim president, who had herself served as president from 1998 to 2017. But a 2020 letter signed by 23 senior leaders calling for intra-party elections was seen as a direct challenge to the Gandhis. With neither willing to run, Gandhi family loyalists had to accept a contest they did not want.

When Shashi Tharoor, a signatory of the 2020 letter, announced his candidacy, Gandhi loyalists began frantically to search for an alternative. Their first choice, Rajasthan Chief Minister Ashok Gehlot, withdrew when his faction in the state legislature refused to back his rival and deputy, Sachin Pilot, for Chief Minister. Gandhi loyalists then settled on Mallikarjun Kharge, a veteran Dalit leader. Kharge called on Tharoor to withdraw to allow for a ‘consensus candidate’. Leading up to the final vote on 17 October, many state units and individual legislators publicly called for Rahul to be president or Sonia to select one.

In the end, Kharge’s landslide victory was a foregone conclusion. With most of the 2020 letter writers backing Kharge, it was as much a testament to the party’s dependence on the Gandhi dynasty as a demonstration of intra-party democracy.

After independence, the relationship between the Congress organisational president and its principal political leader changed several times. Under Nehru, after an initial struggle, the INC president was clearly subordinate to the party’s political and legislative leader — the prime minister. After Nehru’s death, powerful regional leaders gained control of the organisation and the presidency for some years. But they were eventually outmanoeuvred by Indira Gandhi, who split the party in 1969 and restored the party leader’s supremacy over the party president.

Following her defeat in 1977, Indira Gandhi took the presidency of the party herself. This practice, in which the party leader held the organisational presidency, remained the pattern until 1998. Following successive defeats in 1996 and 1998, the party elected a reluctant Sonia Gandhi, former prime minister Rajiv Gandhi’s Italian-born widow, as president.

Sonia Gandhi’s leadership forced a new model. As her Italian origins made her unacceptable as prime minister to many, the organisational president now exercised supremacy over the legislative leader. When the INC formed a coalition government from 2004–2014, the prime ministership went to a politically weak technocrat, Manmohan Singh, while Sonia Gandhi exercised sway from outside the government.

With the INC now out of power and the Nehru-Gandhi family having given up the organisational presidency as well as all legislative leadership posts, their continued hegemony appears to have brought the INC full circle. The major centre of power is now entirely divorced from any formal leadership positions in the party.

The INC continues to cling to a charismatic model of leadership tied to a single dynasty that has long ceased to deliver victory. The result has been the hollowing out of the INC in several states as voters who might have supported the INC instead turn to renegade INC factions — notably West Bengal’s Trinamool Congress, Andhra Pradesh’s YSR Congress and Maharashtra’s Nationalist Congress Party.

Since Indira Gandhi’s death, no INC leader has demonstrated the same appeal and ability to get votes. The perpetuation of the supreme, extra-organisational authority of the Nehru-Gandhi family — even against their own apparent wishes — prevents any alternative national leader. Whether the election of a new organisational president will change that remains to be seen.

Arun R Swamy is Professor of Political Science at the University of Guam.