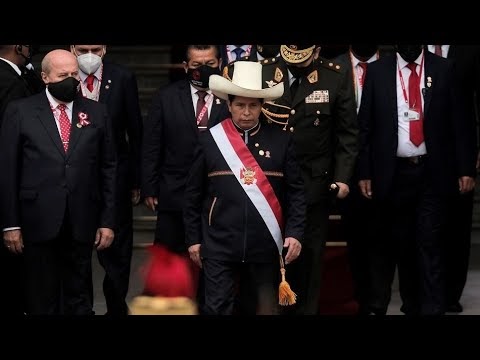 CNN: Peru’s President impeached and arrested after he attempts to dissolve Congress

Peru’s President Pedro Castillo has been detained by police in capital city Lima, a source with knowledge of the case told CNNE, after lawmakers voted to oust Castillo in a tumultuous day for the South American nation.

Vice President Dina Boluarte is expected to be sworn in as the new President of Peru, but would need to gain cross party support to be able to govern.

A majority of 101 members in Peru’s 130-person congress voted to impeach the embattled Castillo on Wednesday afternoon, following an attempt earlier in the day by Castillo to dissolve the body and install an emergency government.

WNU editor: President Castillo lost control when many members of his own cabinet resigned in protest over his attempt to dissolve Congress and install an emergency government with him in control. It looks like he has been detained by the police …. Pedro Castillo: Peru leader seen with police after impeachment (BBC). It is expected that the Vice-President Dina Boluarte will be sworn in as the new President of Peru.

Peru president dissolves congress, which then ousts him — AP

Peru’s president reportedly detained and accused of sedition — The Guardian