The state of Guanajuato woke up in flames after multiple burning vehicles were registered in various parts of the entity, such as in Juventino Rosas, Villagrán, and Celaya, which generated alert among citizens, since even some educational establishments have suspended classes for this Wednesday, November 9.

Local reports indicated that almost a dozen transport vehicles were on fire. In Villagrán it was learned that a passenger truck was set on fire in the community of San José, as well as an Oxxo at the exit to Juventino Rosas. 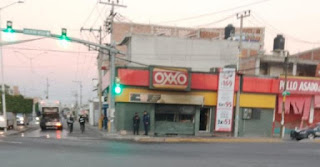 Other points where narco blockades were alerted were the Comonfort-Empalme Escobedo highway; Juventino Rosas-Celaya road, near the town of Tavera; in the Real Villagran subdivision and on the Celaya-Salamanca highway.

“The M-7 unit attends the vehicle fire report on the old road to Celaya, La Luz neighborhood,” reported the Juventino Rosas Fire Department, where two burning units were also located on Boulevard Lázaro Cárdenas. So far there are no reports of injured people or fatalities, although there are no people detained for these events.

The Industrial and Services Technological Baccalaureate Center (CBETIS) number 238, located in Juventino Rosas, Lázaro Cárdenas neighborhood, suspended classes this November 9 for the morning shift, and they indicated that in the next few hours it will be determined if there will be activities for the evening. “Due to disturbances in Juventino Rosas and Villagrán, classes are suspended for the morning shift today, November 9. The paramount thing is the safety of our students, ”the educational establishment announced through its social networks.

Although the reason for these disturbances is unknown, it was unofficially indicated that these actions would be in response to the arrest of Juan Rodolfo Yépez Ortiz, alias El Rudy, brother of José Antonio Yépez Ortiz, alias El Marro, who was the leader of the Santa Rosa de Lima Cartel (CSRL), with a strong presence in Guanajuato.

After the events, an operation was deployed in the municipalities, in which elements of the National Guard (GN), the Mexican Army, and the police of the different municipalities such as Celaya and Cortazar participate. Local media indicated that it was allegedly armed men who stripped the owners of their vehicles to set them on fire.

Armed men also attacked the facade of the Municipal Police headquarters of the Empalme Escobedo community. Fortunately, there are no injuries or deaths. The walls have several high-caliber bullet holes and the bulletproof glass is riddled with bullet holes.
El Rodo and/or Rudo, as the 39-year-old capo is also known, was apprehended by the Baja California authorities along with three other people last Tuesday, November 8, after they searched the vehicle in which he was traveling and found $60,000 and 40,500 pesos, of which they could not prove their legal origin.

It should be noted that Juan Rodolfo Yépez is originally from Santa Cruz Juventino de Rosas, a town where the burned vehicles were registered and where the CSRL operates. After El Marro’s arrest in August 2020, it is possible that his brother was the one who took command of the criminal organization that is at odds with CJNG in the region. Although leaked documents from Sedena were released by the hacker group “Guacamaya”, Karen Elizabeth Yépez Ortiz, sister of El Marro, is mentioned as the head of the criminal group.

To confront the Jalisco Nueva Generación Cartel (CJNG), the CSRL would have allied itself with the Unión de León, Los Viagras, and the Sinaloa Cartel, which operates in Guanajuato through its armed wing known as “Gente Nueva de Los Salazar”, according to security analyst David Saucedo.

These events are added to the attack on the San Fermín Clinic that occurred the day before, located in the Las Flores neighborhood, in Celaya, where armed men opened fire on the building and set it on fire. And it is that it transpired that members of the CSRL attended in that place, so it is presumed that the attack came from the CJNG.