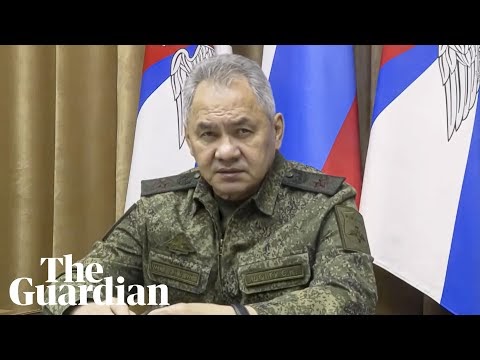 Daily Mail: The moment of Putin’s humiliation: Russian commander squirms as he is forced by Sergei Shoigu to order troop withdrawal from Kherson

* Russia will retreat from Kherson, Putin’s top commander in Ukraine has said

This is the moment Russia’s top commander was ordered to withdraw from Kherson, after admitting the city is impossible to defend in the face Ukrainian advances.

General Sergei Surovikin was hauled on to state TV alongside Defence Minister Sergei Shoigu who ordered him to pull his men back across the Dnipro River and surrender Kherson to the Ukrainians in a heavily stage-managed affair.

Surovikin gave a report in which he said his troops are in danger and civilians are being killed, before recommending a retreat. Shoigu agreed, to which the squirming general replied: ‘Yes sir. The troop manoeuvres will be made as soon as possible.’