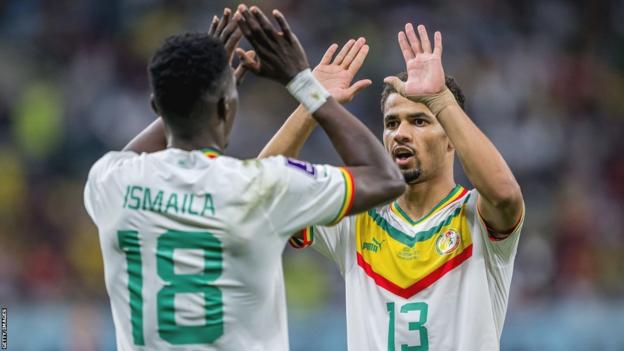 The decision by President Macky Sall to pay Senegal’s football squad its World Cup bonus despite the team not hitting its target has caused anger for some in the West African nation.

The African champions had been tasked with reaching the quarter-finals but bowed out in the second round after a 3-0 defeat by England.

“We will fully pay the qualification bonuses for the quarter-finals for the whole official delegation,” Sall announced two days later.

The World Cup bonuses – which come out of the pool of nearly $23m (£19m) unlocked by the Senegalese government to cover the World Cup costs – will differ depending on the involvement of the 26 players in the entire campaign, including qualifying.

However, some former players and other Senegalese sportsmen have questioned the move.

“If you win you must be rewarded, but if you lose you must learn from it,” former Teranga Lions forward Diomansy Kamara told local newspaper Stades.

Despite its generous nature, Sall’s decision was even less favourably received by athletes from other sports who traditionally have to fight to fund their own participation in competitions.

Hamadel Ndiaye is a Senegalese triathlon champion trying to reach the world series and qualify for the Olympics but despite working as a cameraman in London to help with costs, he has often been unable to afford flights that would have enabled him to compete.

He admits to feeling put out when learning that supporters would have free passage to watch the Teranga Lions in Qatar.

“Firstly, I was disturbed when I heard the story about the nice amount of money unlocked to bring fans to Qatar,” the former swimmer, 26, told BBC Sport Africa.

“Sometimes we have to wait until the last minute to know if we can participate or not.”

Ndiaye’s viewpoint is backed by up athlete Sangone Kandji, who represents Senegal in the triple jump and says such situations are happening far too often, preventing athletes from “acclimatising” at event venues and thus affecting results.

“This year, at the Islamic Solidarity Games, we arrived late in Konya and one of the athletes landed the day before his race. Those things need to be reviewed so that we can help the athlete to recover (from their trips).”

After her triple jump title at June’s African Athletics Championships in Mauritius, Kandji adds she was rewarded with a “modest sum”.

Olympian Ndeye Binta Ndiongue is a Senegalese fencer also fighting to earn a living, and who was only paid last year for results-related bonuses dating back over a decade to 2008.

“This year, I won the bronze medal at the African championship and the bonuses are yet to come my way,” she told BBC Sport Africa.

“(The funds for football) bring frustration even if I understand that it brings sponsors and excitement to the whole country.”

According to Ndiongue, a Senegalese gold medal holder in fencing is awarded roughly $650 (£539)after a continental title, a sum likely to be dwarfed by that received by the footballers.

In addition to frustration over the bonuses awarded to the Teranga Lions, these other athletes are also constantly troubled by the attention lavished on football in comparison to other sports.

“Football is the priority and everybody knows it – all the African federations suffer from this,” insists Diongue.

Last December, Guy Marius Sagna, one of the opposition leaders, backed the various athletes when the sports minister’s budget was voted on at Senegal’s National Assembly.

“This is a long, ongoing debate – is he the sports minister or the football minister?” Sagna poignantly asked.

In response, Sports Minister Yakhouba Diattara promised “there is no sport we will not support”.

“I think the solution is to have a meeting every year between the Olympic National Committee, the government and the different federations to arbitrate,” he continued.

“The sports that we believe have a chance of winning medals will receive funds. The others will have to wait.”

As she continues a life where funds are in short supply, Diongue focuses on her own training plan while teaching fencing to children in the French town of Asnieres-sur-Seine.

When she finally received her bonuses after her participation in her first Olympics, it was mainly to cover her debts.

As Senegalese authorities prepare to host the 2026 Youth Olympics, the first Olympic event in Africa, new infrastructure is being built or renovated in and around the capital Dakar.

During the last Games in Tokyo, nine athletes represented Senegal, but the nation’s only Olympic medal remains the silver won by 400m hurdler Amadou Dia Ba in Seoul in 1988.

Once again, what could appear a solid investment for the future continues to cause angst among some of the athletes hoping to shine for Senegal in future senior Olympics.

“There were a lot of investments made with the stadium or Dakar Arena, yet these are not used most of the time during the year,” Hamadel Ndiaye points out.

“The equipment in the gym there is barely used and I think it’s a shame because it would be easy to gather a national team and organise training camps.”