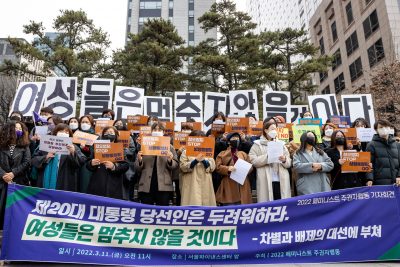 During the 2022 South Korean presidential race, conservative candidate Yoon Suk-yeol denied that structural inequality between men and women exists and threatened to abolish the Ministry of Family and Gender Equality. He narrowly won the presidency in March 2022 by catering to young men, who overwhelmingly believe that discrimination against men in South Korea is severe.

Yet Korea ranks low in global indexes of gender equality, such as the World Economic Forum Global Gender Gap Report. Incidents of violence against women, including domestic assault, workplace sexual harassment, rape and murder have become alarmingly frequent. In a 2015 study by the South Korean government, 80 per cent of respondents — the vast majority of whom were women — reported they had been sexually harassed in their workplace. Human Rights Watch reported that nearly 80 per cent of male respondents admitted to violent acts against an intimate partner in a 2017 survey.

Women constitute more than half of South Korea’s reported homicide victims — one of the highest gender ratios in the world. In September 2022, a female employee of the Seoul subway system was beaten to death in a subway station restroom by a male co-worker who had stalked and threatened her for three years. Similar deaths occurred in prior years.  According to the South Korean Supreme Prosecutor’s Office, 90 per cent of the victims of violent crime in 2019 were women, a significant increase from 71 per cent in 2000.

Digital sex crimes have become an epidemic in one of the most wired nations in the world. Men have set up spy cameras in public bathrooms, women’s locker rooms, stores and subways to film women, distributing the videos online without consent. Less than 4 per cent of sex crime prosecutions involved illegal filming in 2008, but the number rose to 20 per cent in 2017.

Thousands of women’s lives have been impacted, but the prosecution of digital sex crimes and the punishment of convicted perpetrators are notoriously low and lenient. The overwhelming male grip on the police and judicial system — where women comprise only 30 per cent of judges and 4 per cent of police — contributes to the problem.

Young, educated and tech-savvy men have been the main drivers of misogyny and hate speech against women online. They blame women and feminism for their economic and social difficulties in a society distressed by high youth unemployment, spiking housing prices and growing economic inequality. Some of these men have formed the base of the alt-right movement in South Korea, brandishing the conservative flag against women, immigrants, sexual minorities and the disabled. These sentiments have been manipulated by conservative politicians into potent public weapons of battle.

Despite the turbulent anti-woman environment, South Korea’s Constitutional Court recognised women’s right to abortion in 2019 and decriminalised abortion in late 2021. This meant that women who had abortions and medical professionals who administered abortions were no longer subject to fines and jail sentences.

When the Court ruled that the 1953 abortion ban violated pregnant women’s right to self-determination, they were freeing women from decades of state control. From the 1960s to the 1980s, the authoritarian state coerced or forced abortion and sterilisation to lower the population rate in the service of economic development. In the 1980s and 1990s, the state had mostly condoned the abortion of thousands of female foetuses by citizens who favoured male sex selection after prenatal sex screening.

Since the early 2000s, the state has been urging and subsidising women to have more children to reverse South Korea’s demographic crisis — the country with the lowest birth rate in the world. Men have blamed the declining birth rate on women and feminism, a sentiment publicly echoed by President Yoon.

Since the mid-2010s, South Korean women and various civic groups have developed an effective reproductive justice platform that specifies the state, not pro-life advocates, as the enemy of abortion rights. They have staged mass protests, lobbied government ministries and political parties, engaged the media, educated the public and filed amicus briefs in support of decriminalising abortion.

But constitutional promises remain impotent when national laws to protect women’s rights are absent or inadequate. The National Assembly failed to create laws that clarify guidelines for lawful medical abortion by the end of 2020, as mandated by the Constitutional Court in its 2019 decision. This has left medical professionals and women seeking abortion in a legal vacuum with no legislation sanctioning abortion to guide the medical community and health insurance system. Aligning laws with the newly earned constitutional right to abortion is an urgent duty the state needs to fulfil.

The anti-stalking law created in October 2021 also needs to be revised to eliminate loopholes that protect the perpetrator rather than the victim and strengthen enforcement to deter and punish the stalking and killing of women. Otherwise, the misogynistic threats to women and the inadequate legal protections of their bodies and rights will continue to be a fundamental weakness in South Korean democracy.

Katharine HS Moon is Professor Emerita of Political Science at Wellesley College. She is the Kim Koo Visiting Professor at Harvard University and was the inaugural holder of the SK-Korea Foundation Chair and Senior Fellow at The Brookings Institution.