Submersible intercepted in the Pacific transported 1,720 packages of cocaine to Guatemala
December 19, 2022 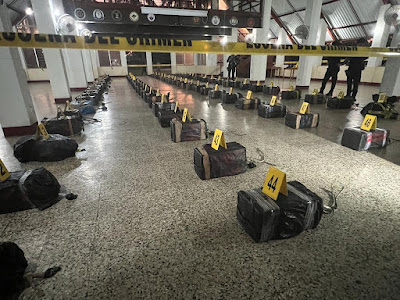 The submersible that was intercepted in Pacific waters on Friday by Guatemalan naval forces transferred at least 1,720 packages of cocaine, authorities reported on Monday.

They have not published pictures of the vessel as of this post.

The submersible was manned by three South Americans – Ecuador and Colombia – but their identities have not been disclosed. According to Army spokesman Rubén Téllez, members of the Pacific Naval Base intercepted the boat on Friday at 250 nautical miles, in international water.

The narcotics were worth an estimated $23.2 million, according to spokesman Moises Ortiz.

On Sunday the vessel arrived towed at the headquarters of the Pacific Naval Base, located in the southern department of Escuintla, where the anti-narcotic authorities carried out the judicial process in which the shipment of drugs they transported was established.

Téllez said that since 2018 there has been no seizure of cocaine in Guatemalan Pacific water. The Public Prosecutor’s Office described the confiscation of the drug stash as “a hard blow” to drug trafficking.

Guatemalan authorities seized more than 1.7 tons of cocaine in a submersible that was intercepted last Friday in Pacific waters, the Public Prosecutor’s Office (MP-Fiscalía) reported on Monday.

Over the course of 2022, anti-Narcotic forces have seized about 4.2 tons of cocaine in Guatemala, according to preliminary official statistics.

Guatemala is used for its geographical position as a bridge for the transfer of narcotics from South America to the United States, according to the vision of experts on the subject, who also consider that 90 percent of the drugs that arrive in the United States pass through the Central American nation.

The seizure of cocaine in 2020, during the first year of the administration of the Government of President Alejandro Giammattei, was also 28.28% less than the seizures that were recorded in 2019.