The Malaysian judiciary after the jailing of Najib 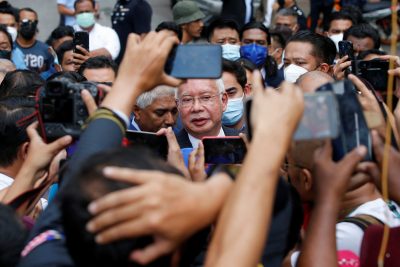 Malaysians heaved sighs of relief when former prime minister Najib Razak’s attempts to overturn his conviction finally failed in the Federal Court on 23 August 2022. This was more than two years after his conviction for criminal breach of trust, abuse of power and money laundering.

Najib was convicted for misappropriating RM42 million (US$9.5 million) from a former subsidiary of Malaysia’s scandal-mired sovereign wealth fund, 1MDB. His lawyers had used every device known to the law to prolong the case as long as they could.

Even as the ring closed on Najib, a social media post was used to argue that the Chief Justice should recuse herself. Najib changed his lawyers twice close to the final hearing. He claimed a further adjournment as if preparing the ground to argue he did not get a fair hearing — after more than four years of argument before the courts. His lawyers applied to admit new evidence and postpone the case by a further three to four months.

But Chief Justice Tengku Maimun Tuan Mat was having none of these manoeuvres. The conviction was confirmed with a sentence of 12 years in jail and a whopping fine of RM210 million (US$45.6 million).

Malaysians were relieved because, while Najib was faced with overwhelming evidence, many could not bring themselves to believe that politics would not intervene to ensure Najib got off on some legal or evidential pretext. Despite the clear and courageous stance taken by the Federal Court, in the face of death threats against the Chief Justice, Malaysians remain fearful that politics may still intervene to give Najib a life of privilege in jail or even an early pardon — for which he has already applied.

Najib still has a large following among the public and considerable power within the main ruling party, the United Malays National Organisation (UMNO). This is despite his responsibility for what the US Department of Justice referred to as the largest case of kleptocracy they had seen, as well as the fact that many charges against Najib relating to 1MDB remain to be heard. His wife Rosmah Mansor was also convicted of soliciting bribes on 1 September 2022. She was handed a 10-year jail sentence and a fine of RM970 million (US$210.6 million).

At least Malaysians now know that their judiciary is independent. But they had reasons for their scepticism, which go back at least to 1988, when Mahathir Mohamad, the then prime minister, executed a coup against the judiciary. During his first term, Mohamad secured the dismissal of Lord President Salleh Abas (equivalent to Chief Justice) and two other judges who had made some decisions that annoyed him.

This was achieved despite mass protests, especially by members of the Malaysian Bar. Other scandals concerning the judiciary were to follow and the Bar constantly lamented the decline of a once proudly independent institution into a mere branch of the executive power. Yet for some it seems that this dire situation is being reversed.

From the mid-1990s some of the former staunchness of judges in defending the rule of law and constitutional rights gradually reappeared. But in 2007 scandal struck again when opposition leader Anwar Ibrahim published secret tape recordings of a senior lawyer fixing judicial appointments while in discussions with a minister.

The ‘Lingam tapes’ as they came to be called prompted another mass protest by lawyers in a Pakistan-style ‘march for justice’. The outcome of this march was a government promise to rectify the situation. In 2009 a Judicial Appointments Commission (JAC) Act was passed to ensure some degree of independence in the process of judicial appointments.

Although the Bar remained sceptical, the new JAC did result in a turnaround in judicial appointments, with a greater variety of ethnicities represented on the bench, many more female judges, and the elevation of more lawyers from the private bar as opposed to the public service.

One outcome of this is that the current Federal Court has a majority of women. Among apex courts worldwide, only the Canadian Supreme Court has had a female majority. Naturally it has taken time for these changes to affect higher court decision-making, as judges are initially appointed at the High Court level before being promoted to the appeal courts.

For those who have followed these developments the assertion of judicial independence is not a surprise. During the last five years or so Malaysia has witnessed a number of strong and important decisions in the higher courts asserting the rule of law, defending constitutional rights and pushing back on encroachment by Sharia jurisdiction. The higher courts have protected judicial power and minorities such as transgender and indigenous people. The decisions relating to powerful political figures follow from this history.

The issue now is whether decisions of this kind will be respected. This is a consideration that will be borne in mind by Malaysia’s King when it comes to the issue of granting the former prime minister a pardon. The filing of an application for a pardon has, for now, enabled Najib to stand in the upcoming general election despite the nature and circumstances of his crimes.

The rule of law remains in the balance, as it has throughout Malaysian history, and Najib’s and Rosmah’s cases will continue to require the most careful handling.