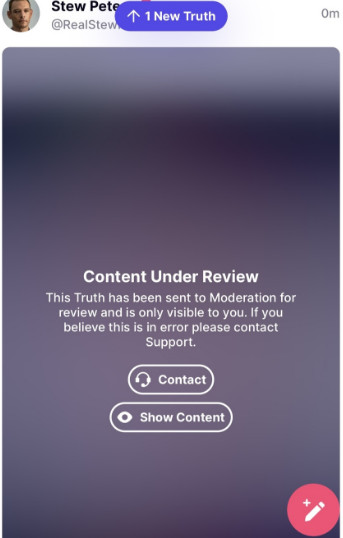 A Truth Social post from conservative commentator and Died Suddenly creator Stew Peters initially received a “sensitive content” label before it later disappeared. The post drew attention to a number of public health officials who have reportedly suffered adverse effects from the COVID-19 vaccination campaign. Peters has tested the platform’s commitment to free speech absolutism in the past.

The post was not deleted, though it was slapped with a “sensitive content” warning that viewers had to acknowledge before viewing the post and linked article. “‘Truth’ Social has more censorship than Elon Musk’s Twitter,” Peters wrote in a Gab post referencing the warning label.

Former President Trump launched Truth Social in the name of free speech absolutism after his Twitter account was unjustly shut down. However, the company does adhere to a number of “anti-hate” standards laid out by Google and Apple in order for its app to be available in their respective marketplaces.

Stew Peters has questioned the platform’s commitment to free speech absolutism in the past. Not long after the platform was launched, Peters was slapped with a similar label after testing the platform’s boundaries compared with other Twitter alternatives.

“I’m ALREADY being censored on Truth Social. Want to know what I said?” Peters wrote in a Gab post. “I said, ‘The people in our government responsible for allowing our kids to be killed with these dangerous Covid shots, should be put on trial and executed.’ Free Speech isn’t free.” The post was slapped with a warning label from Truth Social but left undisturbed by Gab and Telegram.

It is unclear whether former President Trump will remain committed to Truth Social for the long-term, though he has indicated as such to this point. Trump’s famous Twitter account was recently unbanned by Elon Musk, though the former president has indicated that he intends to stay on Truth Social.

RELATED: Musk Hints That He Will Disclose Details of Twitter’s Suppression of the Hunter Biden Laptop Story