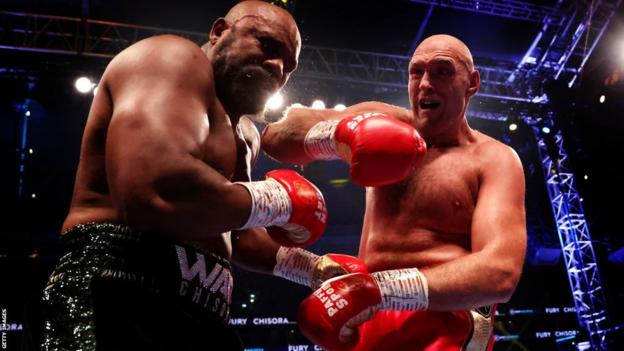 Fury, 34, maintained his unbeaten record in front of 59,769 people at Tottenham Hotspur Stadium.

Fellow Briton Chisora, 38, was hurt repeatedly by the dominant champion and the referee waved off the one-sided contest in the 10th round.

Usyk, holder of the IBF, IBO, WBO and WBA belts, was ringside in London.

For Chisora, it was the 13th loss of his 46-fight career and his fourth in the last five.

Earlier this week, the pair shook hands and promised to stand toe-to-toe in the opening three minutes with Chisora promising “the best first round the heavyweight game has ever seen”.

And, in front of an incredible atmosphere – despite the cold conditions at an outdoor December night event in London – the two fighters tried to provide the entertainment they had promised.

But the fight did prove a mismatch as Fury was a level above his opponent and can now look forward to a potential undisputed heavyweight showdown with Ukrainian Usyk in 2023.

Fury, back in action after saying he would retire from boxing in April, has targeted at least three fights in 2023. In chaotic scenes afterwards, he challenged two rivals – Usyk and unbeaten Briton Joe Joyce – at the same time.

As Usyk confronted him at the ropes, Fury added: “Usyk, you’re next, 15 stone little body building midget. I’ve done one Ukrainian, [Wladimir] Klitchsko, let’s get it on.”

As Joyce then showed up, Fury said: “I’m saying Joe Joyce, a brilliant fighter, he deserves a title fight. If the rabbit [Usyk] doesn’t fight, we’ll fight at Wembley.”

However, there could yet be an obstacle as Fury, in a later interview with ESPN, said he had problems with his hand and may need surgery on his right elbow “which will take about 6-8 weeks to heal”.

There were hopes Chisora could produce a career-defining performance and defy the bookmakers, who had dismissed him as a 14-1 outsider.

However, by the second round it became clear this fight was going to go the way of their first two meetings.

Chisora tried to force Fury back onto the ropes early on, with a number of punches to the body, but Fury landed a huge overhand right soon after and started to land at will from range.

A Fury left hook in the second rocked back Chisora and he ended the round in the corner and in trouble.

In the third, both men ended up in a heap on the floor as they lost balance, but it did not matter as Fury took complete control.

Chisora, as he has done throughout his 15-year career, gave it everything but was simply outclassed by Fury, whose shot selection, power and ability helped him pick off the rounds with relative ease.

Two solid right hooks landed in the sixth and in the seventh as Chisora continued to take a lot of punishment – and the only question was if he could land a wonder shot of his own.

He could not – and a bad cut developed around his eye in the ninth, before a brutal Fury uppercut in the following round marked the beginning of the end.

Speaking to BT Sport, Fury praised Chisora and the fans as he said: “I just want to say, what a crowd – 60,000 in Tottenham, I love every single one of you people. This is overwhelming, I want to say a massive thank you.

“I felt good, I needed some rounds, I haven’t boxed since April. I was landing good punches, but take nothing from Del Boy [Chisora], it was a pleasure to fight tonight, he is a British folk hero.

“What a tough man. I hit him with shots that would have sparked anyone else out.”

Fury then led the crowd in a chant of “Oh, Derek Chisora”.

Chisora, whose own future will now be in doubt, was gracious in defeat as he added: “Thank you Tyson, I really appreciate that. We are friends.

“There’s a big fight coming, everyone wants to see one champion in the heavyweight division.”

Earlier, Britain’s Daniel Dubois survived a huge scare, coming back after being knocked down three times in the first round to beat South Africa’s Kevin Lerena and retain his WBA (regular) heavyweight belt.

The 25-year-old was facing a second defeat of his career and also suffered what appeared to be a knee injury in a horrendous opening three minutes.

However, after regaining his composure in the second, Dubois, who has gained 18 of his 19 victories inside the distance, caught Lerena in the third, sending him to the canvas.

Lerena got up, but it was the signal for a barrage of punches from Dubois as the home favourite sensed this was his moment.

A truly brilliant uppercut – which drew gasps from the fans when replayed on the stadium’s four big screens – rocked Lerena’s head back and the South African was on the verge of going down again when referee Howard Foster moved in to stop it.

A loss for Dubois would not only have seen him lose his WBA regular belt, but end his hopes of fighting Usyk in the future.

It was a superb recovery as he showed great character to turn this fight around in such dramatic style.

“It was amazing. He caught me on the top of my head. I feel my knee went,” Dubois told BT Sport Box Office.

“But I have the heart of a warrior, and I just thought, calm down.

“I was looking for shots that weren’t there, I had to recover and come back out. I saw the opening, went for it and the rest is history.

“I felt a bit rusty, like I wasn’t there in the first round, but at least I was able to land my shots.

“I’ve never boxed in front of as many people, hopefully many more to come.”

Find out how to get into boxing with our special guide.