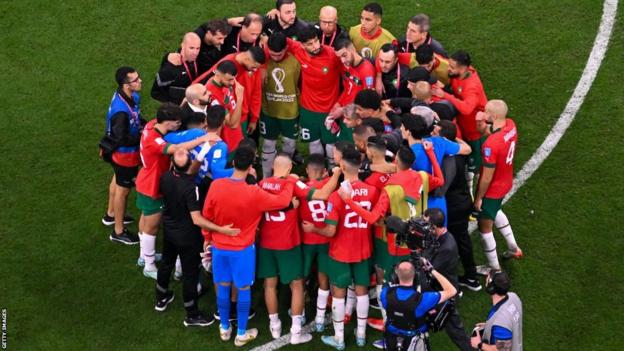 Morocco can be proud they are playing a seventh game at the 2022 World Cup in Qatar, even though it is not Sunday’s final, says head coach Walid Regragui.

Their history-making run saw them become the first African nation to reach the semi-finals, but they were beaten by France on Wednesday.

On Saturday, they face Croatia in the match to decide who finishes third.

“We would like things to have gone differently and played in the final,” said Regragui.

“There is another game to play, we would like to be on the podium.

“I understand it’s important to finish third rather than fourth, but my takeaway is we didn’t reach the final. We wanted to play the final on Sunday, not play tomorrow.

“But I told my players this is our seventh World Cup game. If you told any Morocco fan we would be playing our seventh game on 17 December, they would be proud.

“Morocco played six World Cup games in 20-odd years and now we’ve played six games in a month – this is priceless. It’s as if we played two World Cups or even more, that’s beautiful from an experience point of view.”

Morocco and 2018 finalists Croatia will both end the tournament as they began it – by facing each other.

The two nations played out a goalless draw in Group F on 23 November at the Al Bayt Stadium, but Regragui is predicting a better encounter on Saturday.

“We knew Croatia were going to be one of the best teams in the competition,” he added. “After the first game, we knew the performance was very good.

“A lot of people said Croatia were approaching the end of their cycle and would have the rug swept out from under their feet. Croatia got stick for not beating ‘underdogs’ Morocco, but both teams reached the semi-finals.

“There was a lot of hesitation for the first game. Both teams will want to win it and it will be a great game.”

The game could be Croatia captain Luka Modric’s last with the national team and Regragui praised the 37-year-old Real Madrid midfielder.

“I don’t know if it’s Modric’s last game, he’s a competitive warrior and will want to finish his World Cup in style. When he wants to finish on a great note, we should be wary,” said Regragui.

“Hats off to Modric. What he’s doing at 37 is monumental. He was a Ballon d’Or winner and I completely understand why.”

However, Croatia coach Zlatko Dalic believes Modric will continue playing for the national side long enough to feature at the 2024 European Championships.

“I hope that he will be there,” Dalic said. “I am looking forward to it.

Dalic says his side are looking to end the tournament on a high in what he sees as a “huge match”.

“For us, this is a major final, a major match and a fight for a medal,” he added.

“We have a lot of respect for the Moroccan team, who achieved a lot at this tournament and are a true surprise.

“They are of the same mindset. It is a huge match for them as well, they are coming with a strong line-up and we are not thinking about what the rivals are saying because we are well aware they are fighting for the same place and, for both, it is a huge match.

“Morocco resembles us from four years ago, no-one expected them to go so far. They have deserved to be where they are, they have matured and developed and went to a higher level with every game. They have grown into a team that are full of energy and self-motivated.

“They are definitely the most pleasant and biggest surprise from this World Cup, speaking of teams who could have done better – Spain, Germany, Netherlands, England – Italy did not even qualify. This is a specific World Cup where a third-place play-off is played by two nations who were not favourites.”

Regragui confirmed skipper Romain Saiss will not be fit for the match, having risked his captain at just “60-70%” in the semi-final, a decision which backfired when he limped off after just 20 minutes.

“We took a risk but it was a risk worth taking,” added Regragui.

“We wanted to go out to battle with him leading the battalion. We have another couple of injured players but we will see how it goes.

“We really, really pushed our players to their limits but they still want to go out and play again. We are going to be taking risks again.”

Croatia could be without midfielder Marcelo Brozovic, who was taken off in the semi-final defeat by Argentina.

Centre-back Josko Gvardiol, who has impressed throughout the tournament, is nursing a foot injury but may still play. 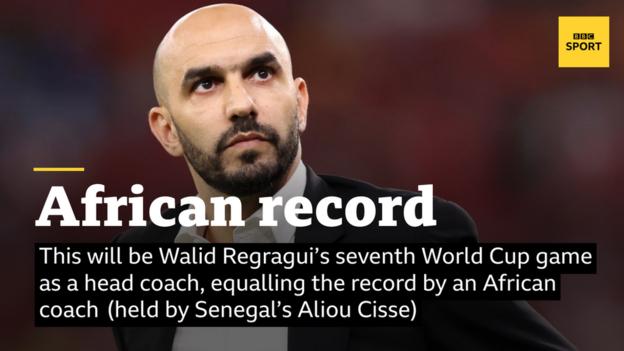