World Cup 2022: Day of disappointment for England and Wales, but both can still qualify 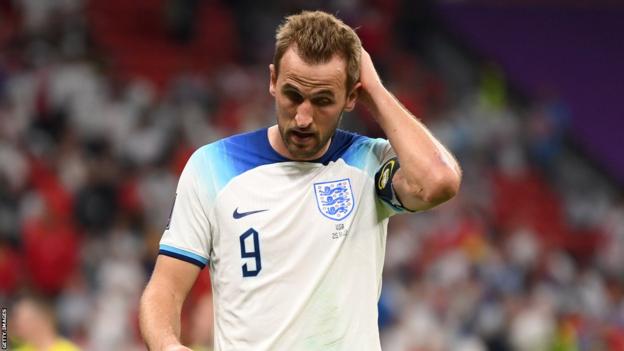 It was a day of frustration for England and Wales at the World Cup in Qatar – but both teams still have a chance of qualifying for the knockout stage.

That meant England could have sealed their place in the next round with a win against the USA, but could only labour to a goalless draw.

The two teams now meet in their final group game on Tuesday.

Wales looked to be hanging on to a battling point as the game ticked over into added time but two late goals from Roozbeh Cheshmi and Ramin Rezaeian earned victory for Iran, who were thrashed 6-2 by England in their opening match.

Their task had been made harder when goalkeeper Wayne Hennessey was sent off with four minutes of normal time remaining, following a video assistant referee (VAR) check, for a reckless challenge on Iran forward Medhi Taremi.

Iran had earlier seen a first-half goal disallowed for offside, before hitting the post twice in a matter of seconds early in the second period.

Wales manager Rob Page had no complaints with the result, describing the performance as “nowhere near the levels we’ve set”.

He added: “When there are so many off days, there is only one outcome. It’s a difficult changing room at the minute, but we will be ready [against England].”

To qualify, Wales must now beat England on Tuesday and hope for a draw between the United States and Iran.

That result put England in control of Group B and they knew they would qualify with a game to spare if they beat USA in Friday’s evening game.

But they put in a sluggish display and were second best to their opponents for long periods at the Al Bayt Stadium in Doha.

The USA had the better chances, midfielder Weston McKennie missed an easy opening and forward Christian Pulisic hitting the bar in the first half.

Despite the disappointing result England remain firm favourites to qualify for the knockout stage, knowing they only need to avoid a four-goal defeat against Wales to progress, with the top two sides in the group going through.

“The players are a bit down but I said I’m not down, I am not unhappy. It is a game you can lose if your mentality is not right,” said England manager Southgate.