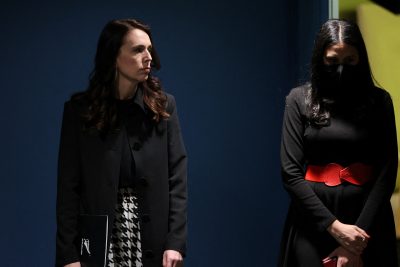 Images in 2018 of New Zealand’s pregnant Prime Minister Jacinda Ardern arriving at Buckingham Palace, adorned in a kahu huruhuru (Māori feathered cloak), were one of the first indications of her international star power and the emergence of ‘Brand Ardern’. But the gap between international and domestic public opinion on Ardern has widened in 2021 and 2022.

Ardern’s relative youth and gender made global headlines when she was elected in 2017. These headlines included her challenges to a media personality who asked if she would have children while in office, her subsequent pregnancy announcement on social media and photos of her baby at the UN General Assembly in 2018.

Ardern has shown innovative leadership in response to several crises. Her response to the Christchurch terrorist attack in 2019 was praised for being empathetic and caring, prompting gun law reform in New Zealand. These events led to Ardern’s ‘Christchurch Call’ — an international call to ‘eliminate terrorist and violent extremist content online’.

Ardern’s innovative leadership during the first year of the COVID-19 crisis effectively created a ‘team of five million’ with warm, straight-forward and motivational public health communication. The government used scientific advice to create a COVID-19 elimination strategy, leading to high vaccination and relatively low mortality rates. The COVID-19 response has been credited for Ardern and Labour’s crushing victory in the 2020 election, winning 50 per cent of the party vote. This led to the first single-party majority since New Zealand adopted a Mixed Member Proportional electoral system in 1996.

While Ardern continues to be viewed favourably internationally, her popularity has declined domestically. Opinion polls for the 2023 election show a tight race between the left bloc, comprising the Labour, Green and Māori parties, and the right bloc consisting of the National and ACT parties. Although polls underestimated the Labour Party vote by 3–4.2 per cent ahead of the 2020 election, the 2023 election polls represent a return to politics-as-normal. Labour won 36.9 per cent of the party vote in 2017, with Ardern stitching together a coalition with the New Zealand First and Green parties.

‘Hope and Change’-style politics can be hard to live up to. One critique of Ardern from the political left has been the government’s inability to live up to transformational-style politics. It is possible that Ardern is only an effective leader in specific domains, such as in crises. The lack of transformational policy may be attributed to Ardern’s government being too cautious to pursue large policy shifts. This hesitancy was seen in the government’s reluctance to adopt recommendations from their own 2018 Welfare Expert Advisory Group or from the 2019 Tax Working Group.

Electoral system factors may also be at play. New Zealand’s Mixed Member Proportional system has been both criticised and praised for producing centrist governments. Ardern’s first term was marked by having to negotiate and govern with Winston Peters’ socially conservative, populist New Zealand First party — a self-styled ‘handbrake’ on Labour.

The 2017 cabinet behind Ardern has also been criticised for being unprepared to govern. An often-cited example being the New Zealand Health Minister, who was based in his own home town during the country’s initial COVID-19 lockdown. He then violated lockdown rules.

The recent downward shift in the polls is related to the issues of the past year. Ardern’s moniker as ‘the COVID-19 Prime Minister’ was initially helpful, but COVID-19 infections are now common in New Zealand and have placed considerable pressure on the health system, businesses and individuals.

The main opposition party, the New Zealand National Party, has gained ground with a renewed leadership team and by reusing strategies that have been successful in the past. These include labelling Labour as the tax-and-spend party and presenting leader Christopher Luxon (a former CEO) as being better able to steer New Zealand through a financial crisis than Ardern, who they have branded a career politician.

Inflation has been labelled a ‘cost of living crisis’ by the National Party, pulling the issue away from the realm of inequality that Labour is seen to own and into the National-owned economic management space. Ardern has bold goals for ending child poverty and climate change. But these are stubborn and complex problems. Marked improvements in either issue is unlikely to be seen by voters in the short term or within a single three-year electoral cycle.

The renewed opposition, new economic and COVID-19-related issues and a lack of transformational policy have led to the erosion of support for Labour and will result in a close election in 2023. But most New Zealanders seem to be proud of Ardern as a leader on the world stage, with a few grumblings from the opposition. If Ardern’s government loses in 2023, she will step down from leadership at only 43 years old. There is still potential for Ardern to use her international brand, alongside her crisis management and communication skills, to forge a long career in international politics.

Lara Greaves is senior lecturer in New Zealand Politics and Public Policy at the University of Auckland.