CJNG Behind Murder Of Four Young Individuals In Zacatecas 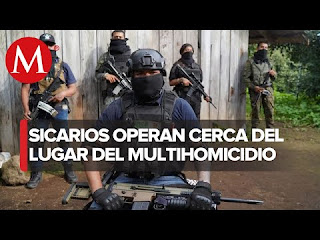 Cartel hitmen operate near where the Jalisco citizens were found.

The Jalisco New Generation Cartel (CJNG) and its cell under the command of El Rojo, the state’s northern region’s plaza chief, may be responsible for the deaths of sisters Viviana, Daniela Márquez Pichardo, their cousin Paola Vargas, and Daniela’s boyfriend, Jose Melesio Guiterrez, whose bodies were found in a grave in Tepetongo, Zacatecas.

Because of its proximity to the town of Víboras, in Tepetongo, Huejúcar is the base of operations, while Huejuquilla el Alto is home to gang leaders.

El Rojo was not violent, but in mid-2022 Las Flechas of Mayo Zambada, the armed wing of the Sinaloa Cartel, gained ground in Zacatecas and Jalisco, which is why in the latter it created a network of spies; there are even indications that hired killers, dressed as officers, patrol with municipal police.

This version is strengthened after the discovery of elements without official registration before the state authority, after the revisions of the Sedena and Jalisco police in Colotlan and Villa Guerrero last week.

They say their last goodbye

More than a thousand people accompanied the family of Viviana, Daniela and Paola in the wake of the young women, who were buried this Sunday in the Colotlán cemetery.

At the foot of the three coffins, the parents of the victims promised their daughters that they will fight for justice.

“Thank God we found our daughters and we will have a place to go to cry, to pray and be at peace,” said the father of Viviana and Daniela.

“Because they were taken alive and we will not be silent. Colotlán will never be silent, because it is awake”, shouted a friend of Viviana when she was buried.

Four graves were dug in the cemetery, but José Melesio will apparently be buried in another state.