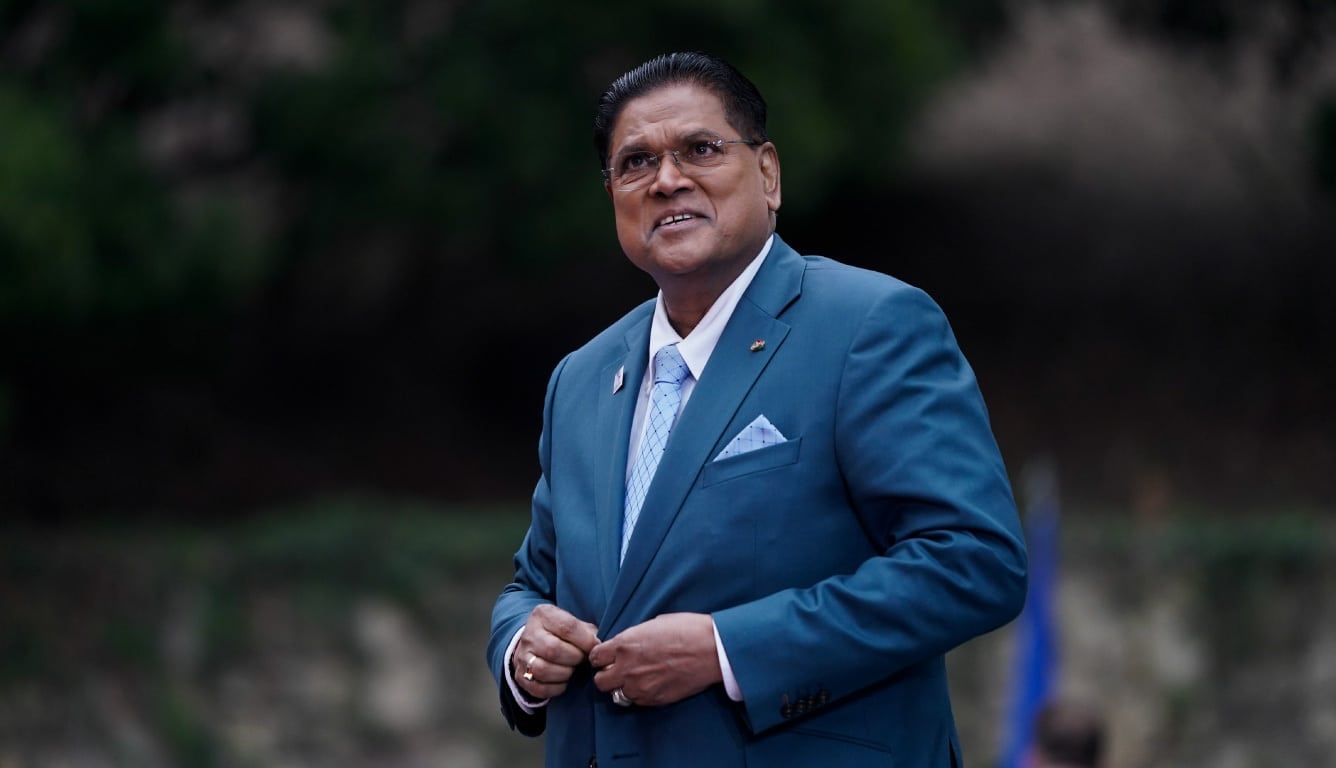 Suriname, South America’s smallest country, is facing multiple criminal challenges. It is a cocaine transit route to Europe, an illegal gold mining hub, and a front line in the fight against kleptocracy.

Bouterse had ruled Suriname on and off for 40 years, including as a military dictator (1980-1987). In 1982, he allegedly ordered the murder of 15 political opponents. In 1983, he hosted Pablo Escobar in his presidential palace. In 1999, he was convicted in absentia by a Dutch court for leading the “Suri Cartel,” a cocaine-trafficking organization.

Santokhi only narrowly defeated Bouterse, forcing him into a coalition government with Ronnie Brunswijk, a former guerrilla leader who Santokhi tracked as a fugitive in the 1980s. Brunswijk, who was also convicted of drug trafficking by a Dutch court in 1999, is now Suriname’s vice president.

InSight Crime sat down with President Santokhi in his office in Paramaribo, Suriname’s hot and humid capital, to find out how he is dealing with Suriname’s major criminal threats.

InSight Crime (IC): Corruption in Suriname was a central issue during the 2020 presidential election. What successes has your administration had in tackling this problem?

Chandrikapersad Santokhi (CS): Well, you must understand that during the ten years of the Bouterse administration, there was a systematic weakening of law enforcement. Before Bouterse took office in 2010, I was Minister of Justice and Police. During that time, I invested heavily in strengthening law enforcement, the judicial system, and specialized services like SWAT (Special Weapons and Tactics), the intelligence unit, and the vetted unit that cooperated with US authorities.

Most of those units were subsequently dismantled. So, when I took office in July 2020, the capacity of investigative and prosecutorial authorities was weak. Within six months, I provided more than 15 prosecutors to the Attorney General’s Office and 12 judges to the High Court.

They investigated tough cases, including the embezzlement of over $100 million from the Central Bank from 2019 to 2020 and subsequent convictions of the former central bank governor, Robert van Trikt, and former finance minister, Gillmore Hoefdraad.

In the case of the central bank, we just approved new legislation to give it more independence — in line with calls by the International Monetary Fund (IMF) and the international community. That said, look what already happened with less independence: The central bank was robbed. So we also want to create a better checks-and-balances system to give the board of directors more authority in controlling what the governor is doing.

We are also working to establish Suriname’s first-ever Anti-Corruption Commission, which will register and track the assets of over 4,000 elected and appointed officials of a certain rank. So overall, our judicial and investigative capacities are improving, but I would like more speed.

IC: How has that lack of capacity affected the fight against organized crime?

CS: We have several types of organized crime. The most important is the drug trade. In April 2022, we hosted the first High-Level Security Conference (HLSC), bringing together all the countries related to the transshipment of drugs through Suriname.

Our desire for strong multilateral cooperation has already yielded results: the confiscation of several drug planes, the destruction of several illegal airstrips, and the seizure of over 1.6 tons of cocaine from January to October 2022. That said, while we often receive information about the arrival of drug planes, sometimes we only have a response time of two hours.

Our armed forces only have three helicopters, and their flight capacity is limited. That’s why, when I met with US Secretary of State Antony Blinken in September 2022, my requests were that Washington both provide logistics support and re-establish a US Drug Enforcement Administration (DEA) liaison office in Suriname.

The same request was made to the Brazilian and French governments, including when the French minister of justice came to Suriname in October 2022. They have all those helicopters in French Guiana: I have the intel, I have my people. You just send your chopper, and I can go and grab them.

Then we have other types of organized crime: illegal arms and human smuggling. Those are also high up on the political agenda. But what is seriously affecting both the economy and ordinary crime, like violent crime, is the drug trade.

IC: How has cocaine trafficking through Suriname changed during your administration?

CS: I don’t believe that it was significantly disrupted during the COVID-19 pandemic. These cocaine trafficking networks are extremely adaptable. Yes, during the lockdown period there was a lack of transshipment options, but that just meant there was a huge amount of stockpiling of drugs.

They planned their future deliveries. Directly after the lifting of restrictions, you saw huge exports again. It took my administration until early 2022 to identify where their drug planes were landing. Once we had, we started bombing those illegal airstrips. Our next step is to place army control units and helicopters in strategic positions within the interior.

With the right support, we can play a very significant role in dismantling all these criminal organizations. They had a free zone for so many years. But now we’re back.

CS: Actually, I think in all the recent cases, there were links — direct or indirect — with law enforcement or security forces. The highest rank was a police commissioner. When I took office, organized crime had already managed to get their networks into almost all law enforcement agencies.

Right now, the traffickers are mostly making use of security units for protection, guidance, transshipment, information, and so on. By the time my helicopters start their engines, these guys are already waiting.

That is why one of my first requests as president was the creation of a specialized anti-organized crime unit under the direct supervision of the Attorney General’s Office. That has since happened: it’s called the Judicial Intervention Team (JIT), and it’s doing good work.

IC: Let’s talk about dirty gold. Gold accounts for 80% of Suriname’s export income, yet the sector remains vulnerable to organized crime. Has there been any progress there?

CS: The concession system is a challenge for us. The Bouterse government gave out concessions across the entire interior, so there’s no free space anymore. And on all those concessions, you see informal Surinamese, Brazilian, and Chinese gold miners operating, either with mercury or cyanide. There’s a lot of violent crime. There are often shootings in these areas.

We are trying to create a task force to control these gold operations. Right now, the army is blowing up illegal gold dredges, but that’s generating a lot of unhappiness in the local community. So, we must find a better solution.

I think French Guiana is in a better position: gold mining without mercury. That’s one area where I’d like to collaborate with them because mercury is not only killing Suriname and its people, it’s killing the entire planet.

Suriname is a signatory to the Minamata Convention on Mercury, so using it is obviously forbidden here. It’s smuggled in from outside. That’s why in August 2022, the government decided that within one year, we will forcibly phase out the use of dredges, mercury, and cyanide. The Minister of Natural Resources already wrote a letter to all the dredge owners, since some of them previously had a license or concession.

IC: Historically, lower royalties on gold exports from Suriname meant Guyanese dirty gold was often smuggled across the border and “laundered” here. Does that still happen?

CS: It has varied. Obviously, if our gold royalty is higher than French Guiana or Guyana, there will be outbound smuggling. When we increased our royalty to 4.5%, people started smuggling gold toward Guyana. Therefore, I reduced the royalties to align with our neighbors. However, based on the IMF program, our medium-term desire is to get 7.5% royalty from the gold. That will likely create the same challenges.

IC: In July 2022, protests broke out in Suriname, including over your appointment of family members to public positions. You gave your daughter a job in the presidential cabinet, while you appointed your wife, Mellisa Santokhi-Seenacherry, to the board of Staatsolie, Suriname’s state-owned oil company.

CS: When I took office, there were five people working in the presidential office. I had to completely re-staff and now we have around 250 employees. My daughter was hired based on her professional qualifications. We also had issues with strategic parastatals, like Staatsolie. So I wanted someone there I could trust. The First Lady was willing: she went there, she was criticized, and now she’s out. We are listening to the criticism.

IC: You’re about halfway through your term. What do you see as the main organized crime challenges going forward?

CS: I’m expecting Suriname to be in a better position to fight organized crime during the second half of my term, particularly as we get more support from the international community. However, we should be cautious of shifting priorities and unexpected challenges. Natural disasters, the impact of the climate crisis, and the impacts of the Russia-Ukraine war may drain national resources, which could divert attention from fighting organized crime.

*This interview has been edited for length and clarity.

Lake Titicaca: A Smuggler’s Paradise in Bolivia and Peru