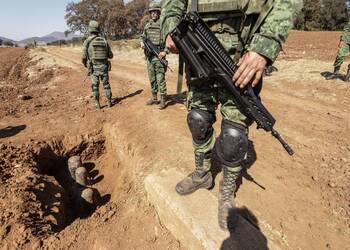 Mexico’s ordinarily quiet state of Hidalgo is seeing a rapid rise in violence connected to an increase in oil theft, showing how promised government efforts to stamp out this criminal economy have stalled.

The director of public security for the town of Metepec in Hidalgo, Fausto Aparicio Herrera, was kidnapped on November 16 as he reportedly returned from a police operation during which security forces clashed with huachicholeros (oil thieves).

This was but the latest episode in an ongoing series of clashes between authorities and huachicoleros.

Since Hidalgo Governor Julio Menchaca Salazar took office in September, he has made reining in oil theft a top priority. At least 125 police investigations into oil theft were opened in his administration’s first month, according to the newspaper Milenio. Additionally, over 156,000 liters of stolen oil were retrieved between early September and early November, according to Hidalgo’s security secretary, Salvador Cruz Neti.

And on November 1, a shootout between alleged huachicoleros reportedly left three dead in the town of Tepatitlán, Hidalgo. This came soon after a police officer died after being beaten by a mob while trying to arrest an alleged huachicol leader in Tulancingo, Hidalgo, according to La Jornada.

Hidalgo currently has the highest rate of fuel theft in Mexico, with 2,675 pipeline taps registered between January and June of this year. At the same time, its homicide rate climbed 28.6% from January to September, according to data from Mexico’s National Security Council (Consejo Nacional de Seguridad – CNS). In 2021, Hidalgo saw 284 killings, with its homicide rate at a five-year low.

The problem is not Hidalgo’s alone. Nationally, Mexico has witnessed a revival in oil theft following a short-lived drop due to the efforts of President López Obrador, who made stamping out huachicol a primary aim during his presidency.

According to the newspaper Excelsior, oil theft rose by 24% between April and October this year. In response, Mexico’s Security Ministry (Secretaría de Seguridad y Protección Ciudadana – SSPC) has increased the number of security force members guarding the country’s 34,000-kilometer pipeline network by 60% to 3,352 troops.

Hidalgo’s security problem is integrally linked to its oil theft, perhaps more than any other state in Mexico.

It hosts the Tula refinery, the busiest in Mexico, and multiple oil pipelines criss-cross its terrain. The refinery supplies a large part of the demand in Mexico City, just to the southwest, and of the El Bajío region to the north, the country’s transport and logistics hub.

Hidalgo is also home to liquified petroleum gas (LPG) pipelines, a firm favorite of oil theft gangs following the closure of oil pipelines by López Obrador at the start of 2019. Taps of pipelines for LPG — the main cooking fuel for three-quarters of Mexican households — rose by 1,000% between 2018 and 2021, according to Bloomberg.

The government of President Andrés Manuel López Obrador has long prioritized oil theft as a top security concern. Hidalgo lay at the heart of this strategy, especially after a pipeline explosion due to an illegal tap killed 137 people in January 2019.

There was early success. In the first months of 2019, the total quantity of oil stolen was 93% lower year-on-year. But this did not last. In 2021, Mexico saw a record in the number of oil taps.

With the black market for oil also soaring due to rising gas prices and worsening poverty, Mexico’s criminal groups are increasingly cashing in. Hidalgo has seen the Jalisco Cartel New Generation (Cartel Jalisco Nueva Generación – CJNG) become an oil theft mainstay, alongside other gangs such as the Old School (Zetas Vieja Escuela) and the Pueblos Unidos.