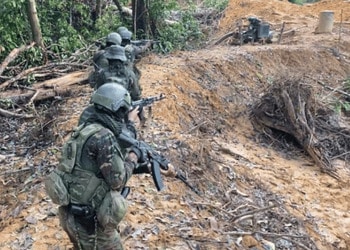 The Venezuelan government has placed small-scale miners and rogue mining gangs in its crosshairs, as shown by a major military deployment in the country’s valuable southern gold mining region.

On November 10, Venezuelan soldiers destroyed a rural camp and arrested several members belonging to a gang known as 3R, or the R Organization (Organización R – OR), which controls much of the illegal mining activities around the town of Tumeremo in Bolívar state.

Since being deployed in late October, security forces have arrested some 19 alleged OR members and collaborators of the gang and have targeted its infrastructure. However, the exact number has not been confirmed, nor have the names of those captured been released.

They reportedly seized four helicopters used to smuggle gold and four drones used by the gang for surveillance, as well as destroyed a fake social assistance center reportedly used to hide the group’s weapons.

Operations in the nearby municipalities of El Callao and Roscio have targeted other mining gangs — known as sindicatos — although the OR’s stronghold of Tumeremo remains the deployment’s epicenter.

Security forces were already picking up activity in Tumeremo in the weeks leading up to the official deployment. By the time the operation was announced, authorities had arrested at least three alleged members of the OR and invaded a mine near Tumeremo, forcing out small-scale miners and destroying a community center near the mine, according to local spokespeople.

These are not the first incursions into Tumeremo this year. In August, military actions targeting the OR in Tumeremo were highly publicized. However, several local sources familiar with mining dynamics in the area told InSight Crime that those operations had little impact on the gang, and the military left after protests broke out.

According to General Domingo Hernández Lárez, the head of the Venezuelan Army’s strategic operational command, these operations aim to rein in illegal mining and formalize this profitable industry. “All mining activity must have permits, registries, supervision, and control. The [Venezuelan armed forces] will supervise compliance with environmental laws and regulations,” he wrote on Twitter.

The current military operations targeting illegal mining have some serious bite to them. They appear to be aimed at taking control of mines in OR’s territory.

Bolívar’s gold has served as an economic lifeline for the Venezuelan government, allowing it limited access to international markets despite United States sanctions. But lacking technological capacity and territorial control, much of the state’s mining activity is controlled by sindicatos rather than the government.

These gangs take a cut of the gold produced in mines under their control, reducing the amount that ultimately ends up in the government’s hands. Although the government has tried on several occasions to assert control over gold mines, it has seen little success and hasn’t mounted a serious effort to force out the sindicatos for years.

SEE ALSO: ‘The Rebel of the South’: Rise of the R Organization

But the government no longer appears to be willing to accept the status quo.

“They forced all of us out of the mines. And I don’t know what we’re going to do, for now, we’re just waiting to see what happens,” a miner in El Callao who has spoken to InSight Crime several times since August under the condition of anonymity. “They want to take over everything, to make sure that all the gold coming from the mines goes to them, to the government.”

The OR, however, is unlikely to leave without a fight. The sindicato is one of the strongest in the state and has forged a reputation for itself as being willing to defend the rights of artisanal miners.