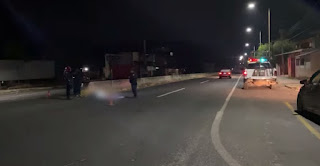 Samuel Avila Marin, alias “El Vago”, the prisoner who was released from the Coyuca de Catalan prison by an armed group was killed in the Tierra Caliente region of Guerrero.

Sources from the Guerrero prosecutor’s office informed that the body of Samuel Ávila was found around 11:00 Sunday night, on the Iguala-Ciudad Altamirano federal highway, in the vicinity of the San José Poliutla crossroads.

The man had his hands handcuffed, padlocks and visible signs of torture; in addition, a poster was found next to him, signed by “El Borrego” – a nickname given to Jose Manuel Cuevas Arias, head of the Familia Michoacana – in which Samuel Avila is accused of being “the nightmare” in San Miguel Totolapan, as well as other municipalities in the region.

Samuel Avila was arrested in Chilpancingo for the kidnapping of a man, but on December 6 he was transferred to the Coyuca de Catalan prison at the request of a judge to face other charges for crimes committed in Tierra Caliente.

A day later, according to a report from the Guerrero prosecutor’s office, at least 80 armed men burst into the prison located next to the town hall and the Municipal Police headquarters, threatened the guards and took the prisoner away.

In December 2017, during the administration of former prosecutor Xavier Olea Peláez, Samuel Ávila was identified as “El Vago” but with the name of Mauro González Hernández, leader of the extinct criminal group “Los Tequileros”; at that time, he was imprisoned in the Arcelia prison and then transferred to another prison without the authorities detailing the place, nor was his release reported. 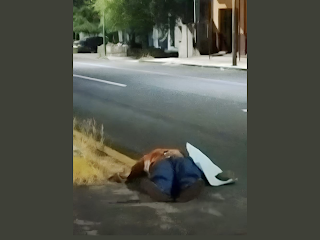 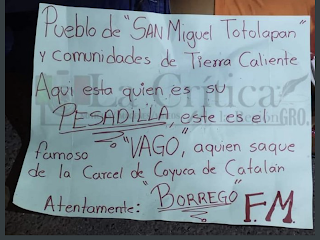 Narco message reads as follows:
For all the townspeople of San Miguel Totolapan and the communities of Tierra Caliente. Here lies your nightmare, the famous Vago whom I’ve broken out of the Coyuca de Catalán jail.
Yours truly, Borrego from the Familia Michoacána 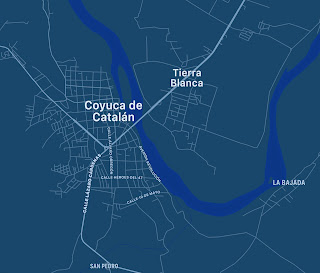