Fire Engulfs A Second Major Shopping Mall In Moscow. The Second Such Fire In 4 Days 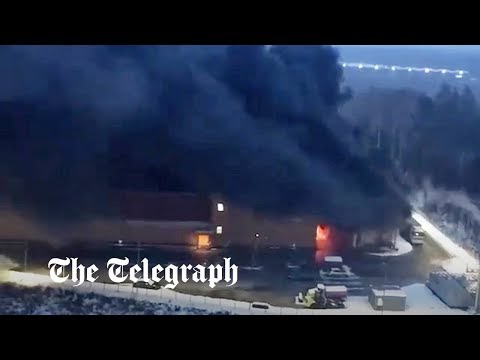 The Telegraph: Fire engulfs another Moscow mall in second blaze to hit city in four days

A massive fire gutted a shopping mall on Moscow’s eastern outskirts on Monday, the second such blaze in four days.

Flames and billowing smoke could be seen rising from the mall in Balashikha in video footage recorded close to the scene.

The building’s roof caved in after the fire first erupted at a storage area of the mall, which trades construction items and home decoration materials, later spreading to the rest of the building. A guard was hospitalised after inhaling toxic fumes from the fire.

The blaze spread to an area of about 9,000 square meters (97,000 square feet), but fire-fighting teams managed to bring it under control and prevent it from engulfing the entire mall.

WNU Editor: My gut is also saying that there is a link with the war in Ukraine and these fires …. Three fires in Moscow raise suspicions of Ukrainian arson attacks (BNE).

Fire Engulfs A Second Major Shopping Mall In Moscow. The Second Such Fire In 4 Days