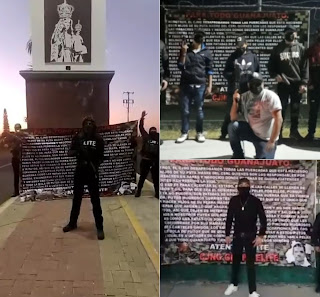 Earlier today Borderland Beat released an article of several narco messages that were disseminated by the Jalisco New Generation Cartel throughout different municipalities in the state of Guanajuato.

Hours later an assessment of videos were also released adding to their communique. All three broadcasts display armed men who appear to be young in age.

At this time it is this writers believe that these males are fresh recruits within the ranks of the CJNG. Everyone present are boots on the ground combatants for the armed conflict against the unyielding Santa Rosa de Lima Cartel.

Sicario #1: Here in Salamanca, Guanajuato. The town of Salamanca and the state of Guanajuato has an owner. And it all belongs to Mr. Mencho.

Come on out to that armed confrontation you murderers of innocent civilians.

Sicarios scream: We are the absolute mob of Mencho you fuckers!

Sicario #1: You sons of bitches!