In A Sign That Nuclear Tensions Are Rising, A US Nuclear Ballistic Submarine Has Entered The Mediterranean 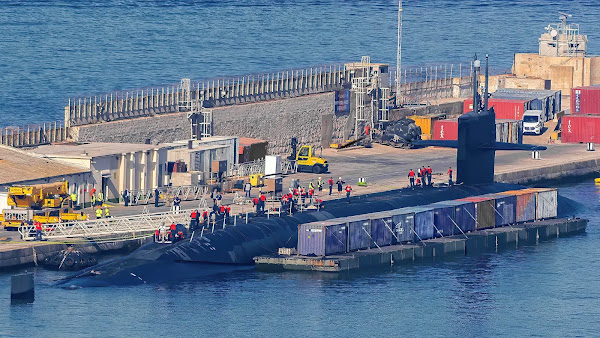 A Mexeflote barge loaded with shipping containers is seen here positioned alongside the hull of USS Rhode Island at His Majesty’s Naval Base Gibraltar. William Jardim

The USS Rhode Island left port in the British overseas territory amid concerns of a Russian false flag operation.

The world’s largest nuclear submarine has been spotted leaving Gibraltar under intense protection from the Royal Marines as it reportedly heads towards the Black Sea.

The USS Rhode Island’s departure comes as fears grow over what Vladimir Putin will do after another humiliating retreat.

Yesterday, the Russian President called for civilians to leave Kherson in the south of Ukraine due to the advancing counter-offensive on the occupied city.

WNU Editor: I am skeptical that Turkey will permit the USS Rhode Island to cross the Bosporus Strait to Enter the black Sea. Turkey has made it very clear that they will permit no warships to cross the strait with the current war now underway.

But should it cross and enter the Black Sea. I will consider such a move as proof to me that US nuclear forces are now at Defcon 2.