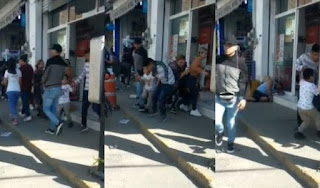 Last Sunday, a man was murdered in the streets of Irapuato, Guanajuato.
As is customary throughout Mexico, the assassins acted with total impunity and tranquility in a busy commercial area in the center of the municipality. On top of this, one of them, who waited aboard a motorcycle, recorded his partner committing the crime in the midst of dozens of people, including a minor who was holding his father’s hand and was less than a meter away from the victim, who was shot at least three times.
After the aggression, all the people present fled for cover.
According to preliminary information, the executed man, about 40 years of age, was a traveling perfume seller.
The assailants, two men not more than 25 years of age, fled after committing the aggression without anyone being able to stop them.