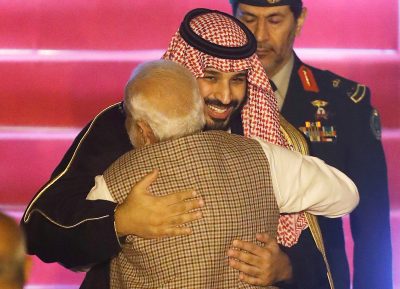 Official Gulf criticism of the Modi government’s Hindu majoritarian politics, which have created a permissive environment for anti-Muslim sentiment in India, had been rare up until then. Although New Delhi’s relations with the Saudi and Emirati governments are unlikely to suffer any long-term damage, India’s image as a pluralistic and tolerant society is under threat.

Indian Prime Minister Narendra Modi has achieved a paradoxical feat in relations with the Gulf states. India’s relations with these states have reached their zenith under Modi, even as the BJP and its forefather, the Rashtriya Swayamsevak Sangh, champion an exclusionary conception of India’s identity that depicts Indian Muslims as foreign invaders and a fifth column for Pakistan.

Even after the Modi government abrogated Jammu and Kashmir’s special legal status in August 2019 by revoking articles 370 and 35A of the Indian constitution and imposed a state-wide lockdown, Modi enjoyed a warm reception in Riyadh, Abu Dhabi and Manama where he was bestowed with state honours.

Modi views the Gulf states as targets for his global religious diplomacy agenda, hoping to use the construction of Hindu mandirs or temples overseas to improve his popularity among his Hindu nationalist constituency. In 2018, Modi laid the foundation stone of the UAE’s first official Hindu temple. In 2019, he launched a US$4 million project to renovate a 200-year-old Hindu temple in Bahrain that has allotted land for the construction of a second Hindu temple.

The Arab Gulf states view the BJP’s Hindu nationalist agenda as a small price to pay for closer relations with India, a rising power and a G20 economy. Since the mid-2000s, the Gulf states have emphasised developing closer ties with their largest trading partners in Asia — China, India, Japan and South Korea.

Under Crown Prince Mohammed bin Salman, Saudi Arabia no longer sees itself as a champion of global Muslim causes as it did in the past. The Saudi Crown Prince is intent on transforming his country into an economic powerhouse beyond oil, relying in part on building partnerships with economic powers such as India to access the knowledge and technology for modernisation.

Meanwhile, Modi, who enjoys a solid majority in parliament, has invested more time and effort into nurturing India’s cooperation with the Gulf states than his predecessors. He has paid state visits to every Gulf country except Kuwait, holding high-level talks with leaders.

By insulting the Prophet Muhammad on TV, the BJP’s spokesperson Nupur Sharma singlehandedly upended Modi’s strategy. On 5 June 2022, Qatar and Kuwait condemned Sharma’s statements and demanded an apology from the Indian government. The rest of the Gulf states followed suit, raising objections to the comments. In Kuwait, reports surfaced of an impending boycott of Indian products as images of Indian products being removed from supermarket shelves circulated on social media.

Sharma’s remarks were not the first time Islamophobic remarks from India have triggered condemnations in the Gulf. In April 2020, Islamophobic statements posted on social media by Indian nationals living in the UAE almost triggered a diplomatic crisis.

The situation prompted the Kuwaiti cabinet to call on the Organisation of Islamic Cooperation to exert pressure on India over rising anti-Muslim hate speech. Minister of External Affairs, Subrahmanyam Jaishankar, sought to lower diplomatic tensions by emphasising the strength of their respective bilateral relations with India during calls with his counterparts in the UAE and Qatar.

Given the Modi government’s swift response in suspending Sharma from the BJP’s primary membership, these Islamophobic remarks are unlikely to cripple India’s relations with the UAE, Saudi Arabia, Oman or Bahrain. Previous cases involving insulting depictions of the Prophet Muhammad in Denmark and France triggered street demonstrations and boycotts of Danish and French products. But the Indian government’s distancing from Sharma helped contain the crisis.

Domestically, the Rashtriya Swayamsevak Sangh has sought to reassure Muslims that they face no danger from Hindu nationalist groups. As Jaishankar’s trip to Riyadh in September 2022 illustrates, high-level visits between India and Gulf officials have fully resumed. Still, Kuwait and Qatar are likely to remain the exceptions. Kuwait’s powerful Islamist opposition and Qatar’s advocacy for political Islam and Islamist groups may constrain the two Gulf nations’ relations with India so long as the Modi government pursues a Hindu nationalist agenda.

Although the damage to India’s relations with its main Gulf partners remains limited, the BJP’s intolerant attitude towards Islam and Muslims tarnishes India’s image among ordinary people. Following Sharma’s remarks, calls for boycotting trade with India went viral, as did video footage of a Kuwaiti supermarket pulling Indian products from its shelves. Opinion articles in Arabic newspapers of various political and ideological persuasions decried India’s turn towards religious polarisation.

Activists and social media influencers are raising awareness of the Modi government’s draconian policies, exerting pressure on governments in the Gulf to express criticism. Once seen as a vibrant and pluralistic neighbour, videos and images of Indian Muslims abused at the hands of authorities and extremist right-wing mobs now circulate routinely in the Gulf.

The cultural, migratory and commercial ties that link Indians and Gulf Arabs precede the growth in formal diplomatic cooperation. While India’s official relations with the Gulf states may be intact, the tarnishing of India’s image among ordinary people in the Gulf is arguably a more worrying and permanent outcome.

Hasan Alhasan is a Research Fellow for Middle East Policy at the International Institute for Strategic Studies (IISS).