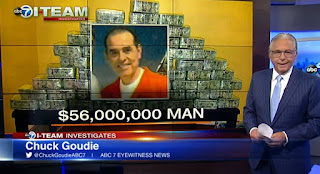 Luis Eduardo Gonzalez-Garcia was sentenced to 30 years in prison and a $1.5 million fine for his role in trafficking drugs and money through the Chicago suburbs.

A federal judge in Chicago has come down hard on a drug trafficker who operated out of warehouses in the Chicago suburbs.

Luis Eduardo Gonzalez-Garcia has been sent to prison for three times as long as he suggested.

According to his own words, Gonzalez-Garcia is a family man. But federal drug agents said he sent $56 million from cocaine warehouses in Naperville and Arlington Heights back to cartel accounts in Mexico, the proceeds of a very lucrative drug-smuggling business.

According to authorities, the drug magnate had yachts in tropical places, expensive gold watches, fancy SUVs and he was toasting the high life on horseback. That is, until Gonzalez-Garcia was arrested in 2018 by DEA from Chicago as he was boarding a plane in Guatemala City.

From Mexico to Atlanta, Chicago and the suburbs, he oversaw one of Chicago’s most lucrative illegal drug operations: A warehouse in Arlington Heights raking in $12 million dollars in cash shipped back to Mexico and a similar suburban warehouse in Naperville yielding $32 million.

Bob Bell, the Special Agent in Charge of the Chicago Field Division, spoke to the I-Team earlier this year about the cartels’ connection to the Chicago area.

“There are direct ties to the Mexico based cartels like the Sinaloa cartel and the new generation cartel in Mexico and their direct relationships and direct activity between the cartels and distribution in Chicago,” he said.

Gonzalez-Garcia was brought to the Metropolitan Correctional Center in Chicago after his arrest and eventually pleaded guilty, expecting a reduced sentence for his good will.

According to paperwork filed by his attorneys he was not just a family man and a business man, but he was a remorseful man.

He even included pictures of his children and letters from his twin sister and a family priest to persuade Judge Ronald Guzman that he should consider mercy, the family man’s good deeds and not just his cartel drug lordship.

Gonzalez-Garcia asked for the minimum 10 years in prison, but Judge Guzman went the other way and sentenced him to 30 years behind bars and a $1.5 million dollar fine.

Gonzalez-Garcia claims he got into the cocaine trafficking business when his tomato-growing business went bad and he became “clouded in bad judgment” to use the words in his court filing.

It would be a move that crushed his family’s good name; his mother had once been the mayor of their Mexican hometown.

At the Chicago MCC the 55-year-old kingpin is counting the days to his release, when he will be in his 80s.